The genre of movies called prequels where the earlier history of a previous movie is shown have a checkered past. I could make the argument that the only truly successful prequel is one which also breaks the rule that sequels are also not as good; The Godfather Part II. That movie is simultaneously prequel and sequel which is why it not only works but it tells the entire story of which we saw the middle of in The Godfather. In the forty-plus years since most prequels suffer from the knowledge the audience has about where the story must go to mesh itself with what we previously experienced. That storytelling limitation has often been the reason why prequels fail. The element of surprise is mostly gone plus if there is a twist it can involve complicated logic sometimes making the originals less engaging. No better example exists than in the Star Wars prequels. In “The Phantom Menace” a decision was made to try and explain The Force biologically with something called “midichlorians”. In the theatre, the revelation was met with nervous giggling because it was so silly. Nearly every prequel suffers from this yet somehow I love these universes so much I want to believe I can re-enter them at an earlier point and still be entertained. This was where I was at going to see the Harry Potter prequel “Fantastic Beasts and Where To Find Them”. 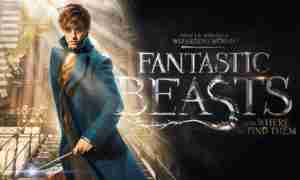 This re-introduction to the Wizarding World does a smart thing by moving it to New York, in 1926. It is written by the author of the Harry Potter books, J.K. Rowling, and directed by David Yates who was behind the camera for the last four of the eight previous movies. Another good choice is no character from the original movies shows up. Instead the story revolves around the arrival of magizoologist Newt Scamander to New York. Inside his magical case is a menagerie of magical creatures which you will be unsurprised to find a few escape from. As Mr. Scamander must locate his missing creatures he gathers up a group of two-legged associates. These will become the same as Harry, Ron, and Hermione were in the originals. The other three are a non-magical human, called no-maj, in America named Jacob along with two witchy sisters Tina and Queenie. Much as it was in Harry Potter there is much to root for here for all of them. The overall theme of this new set of movies is why should wizards hide instead of ruling the world. On the side of taking over is Dark Wizard Gellert Grindelwald who is mostly just a presence here as Voldemort was in the first movie for Harry Potter. Our group believes differently. 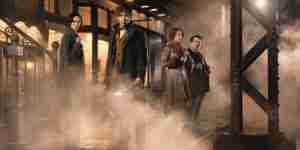 I don’t know who does the casting for these movies but they are among the best. Eddie Redmayne plays Newt Scamander with a near-autistic level of introversion. He avoids eye contact while shying away from humans. Yet he will easily stand in front of a magical creature as big as a dinosaur with confidence. It is a wonderfully faceted performance. As is Katherine Waterston who plays Tina Goldstein a competent woman who was just busted from the Investigative branch. As so many women at that time she wants to prove herself. There is also a beguiling emotion underneath the tough exterior. One scene where she is facing her past while in danger of being killed is where she shines. Alison Sudol plays her sister Queenie and she can read minds. For something that could weigh you down Ms. Sudol plays Queenie as a ray of sunshine despite the worst things she knows of those around her. The last of our core quartet, Jacob, is played by Dan Fogler. As a poor non-magical human swept up in events he plays the role perfectly with incredulity and wonder at what he is seeing. Mr. Fogler easily makes it believable that Jacob is ready to let magic in to his life.

This is supposed to be the first of five movies. Based on some of what we hear in this movie and know from Harry Potter it seems likely we have an idea of where our heroes are eventually headed. What is nice is none of the things they are presumably headed towards have any ability to alter the way we see the Harry Potter part of things. Therefore, I am hoping the prequel curse might be broken by the magic of the Wizarding World of J.K. Rowling.