I am not an atheist despite being a scientist. I will always take facts over the fantastic, yet I also believe there is a spiritual component to my life. I was taken through the Catholic Church all the way to Confirmation. The scientific mind driving the older priest crazy while the younger one, Father Leonardi, seemed amused. He took me serious enough to answer instead of bluster. The part of me which is still Catholic, is because of him. I am happy to commune with the higher spirit in my own way while respecting all who choose a different path.

I was reminded this week as Passover and Easter fall on the same weekend that my horizons were broadened in high school because of my friends I call my “family by choice”. The one I was most temperamentally like was Rich. We could bounce off each other until our friends would yell at us to “Shut Up!”. Which would achieve the desired effect while we cackled. Fifty years later we still try our loved one’s patience.

I spent a lot of time at my friend’s homes. Rich’s parents were the ones most likely to engage us in conversation. One of the key conversations I had in my life on bigotry was Rich’s dad showing me the pamphlets which were passed around about Jews by white supremacy organizations. It was eye-opening on how easy it was to demonize another race. It is one of the earliest conversations I remember having with an adult on a serious subject. I can say the foundation of my beliefs on that subject were formed that day. 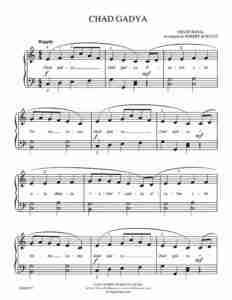 I don’t remember when exactly that conversation took place but upon the next Passover, I was invited to the family Seder. It was a chance to see something more of the Jewish faith other than the Bar Mitzvahs I had been to. Rich’s dad and grandfather took us through all the ceremony explaining everything to me. It was something I soaked up greedily. Along with the food. I am not a good singer and while part of a Passover Seder is singing songs, I kept my voice down. Until we sang Chad Gadya. It was the last song of the night and I decided to give it my all pitching my voice low for the three syllables in the title.

I’ve been to both of Rich’s children’s Mitzvahs. I mentioned my enjoyment of that earlier conversation with Rich’s dad. As a teenager I didn’t have the perspective to know how important it was. It was nice for me to let him know how his words shaped the adult I became.

I’ve also been thinking a lot about where I do place my faith. One of those places is in the friendship of my family and friends. It may not be a church, but it is where I feel the spirit the most.

One thought on “The Sunday Magazine: Faith of Friendship”