For all that I take my comic books seriously some of my favorites are decidedly not. As the potential of what comic books could be evolved throughout the 1970’s there were two series which enjoyed making fun of that. One was Marvel’s “Howard the Duck”. The other was writer Grant Morrison’s mid-70’s tenure on DC’s “Doom Patrol”. Both comics took the oh-so-serious desire of comics to be given respect and gave it no respect. Both series at their best pointed out the silliness at the foundation of superhero culture. 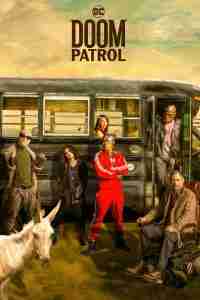 When I heard there was going to be a television version of “Doom Patrol” I wondered whether it could be translated. Writer Jeremy Carver has deliriously taken the no subject can’t be broached style of the comic and broadened it to all of pop culture. With an excellent cast of actors who bring these damaged characters to life it is one of the best television series out there.

The basis of the plot is Dr. Niles Caulder aka The Chief has saved a group of people who have extra normal abilities. We meet him through the story of stock car driver Cliff Steele. He has a fatal accident leaving only his brain intact. The Chief houses it in a robot body. As Cliff awakens, he meets the others. Jane a split personality of 64 each of whom has a specific power. Rita Farr movie star of the 1950’s who has an accident which provides her powers she can’t control. Larry Trainor a test pilot who survives the crash of his X-15 by taking in an extraterrestrial spirit. That is the core team.

Facing them is the villain Mr. Nobody. One of the best parts of Doom Patrol is many of the episodes are narrated by him. As portrayed by actor Alan Tudyk each of this poke fun at the tropes of voice-over narration. There is a sequence in the first ten minutes which sets the tone for the entire show.

For the rest of the first season Mr. Carver and his writing team take every crazy idea to heart. As insane as parts of it are there is a real emotion in the stories of the members of Doom Patrol. As their backstories get filled in it allows the writers opportunities to comment on over five decades of social change. It is intelligently achieved by wrapping it in absurdities.

If you haven’t heard of this show it is because up until recently it was on a fringe streaming service, DC Universe. Happily, the new HBO Max service is giving it a wider platform to be discovered. It is currently halfway through the second season and it hasn’t lost a step from the excellent first season. When you’re exploring the new streaming service give the first episode a try. You’ll know almost immediately if it is your kind of television.