If there is a subject I have written about most in this column it is my love of late-night television. When I was growing up trying to stay awake until 1AM to see the entire The Tonight Show with Johnny Carson was one of those “adult” thing. Only “kids” fell asleep before the end. One of the best guests on the show was Don Rickles.

Mr. Rickles passed away this past week at the age of 90 and there will be who eulogize him for what he meant to stand-up comedy. How his style of insult comedy would spawn hundreds throughout the years. I want to talk about how he nearly single-handedly created the guest-host symbiosis that every late-night show needs to thrive. For it to work there must be two key ingredients respect and friendship. Mr. Carson and Mr. Rickles were the right counterbalance. For Mr. Carson, any appearance of Mr. Rickles allowed his more acerbic wit to surface. It was allowed because his guest was already firing with both barrels. If most of Mr. Carson’s time talking to guests was the equivalent of fast food; any appearance of Mr. Rickles allowed him to up his game.

That give-and-take was the staple of the late-night talk show in the 1960’s and 70’s. What was not at the time was the twist on a remote piece. One of the funniest things I saw when I was 10-years old was Mr. Carson being shown the art of massage as a young woman was walking on his back. He was cracking jokes when suddenly Don Rickles walks in and takes over. Before long Mr. Carson has pushed Mr. Rickles into a tub and they are flinging water at each other. The spontaneity of the comedy and playfulness stood out. 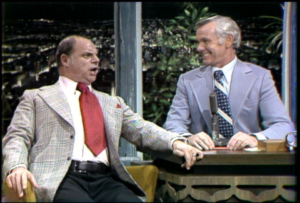 On another occasion, Mr. Rickles had been on with one of the guest hosts while Mr. Carson was away. There was a wooden box that Mr. Carson kept his cigarettes in. On the previous night, Mr. Rickles broke it. When Mr. Carson returned to the studio the next day and noticed the broken box and who had done it he decided it had to be resolved immediately. In 1976 when this happened the portable news cameras were just becoming adopted. Mr. Carson gets one and walks next door to the studio where Mr. Rickles was filming his sitcom CPO Sharkey. Walks on to the set and asks what the hell did you do to my cigarette box. Again, spontaneity and playfulness was on display.

The current evolution of this is the Jimmy Kimmel and Matt Damon feud on ABC’s Jimmy Kimmel Live. A throwaway joke about having to apologize to Matt Damon because they ran out of time at the end of one show has become the best running gag on late-night. Of all the current hosts Mr. Kimmel has the spontaneity and playfulness that you saw with Mr. Carson and Mr. Rickles.

If there is an afterlife I know two old friends have been catching up and probably leaving a mess for others to clean up.