There is a hazard to knowing too much about the process of writing that goes into releasing a popular book. The rapid, and insatiable, information flow doesn’t allow an author to hide away and finish their book. The more popular the author the worse this is. It is something which is never mentioned enough when discussing J.K. Rowling. Writing the most popular book series in the entire world she managed to finish all seven books in ten years. Especially after the third one was released, for the last four books, through the incessant nattering and theorizing Ms. Rowling found the ability to stay on schedule providing readers with a complete story. 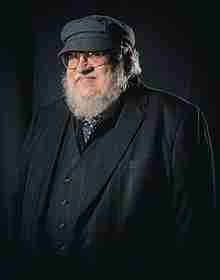 The more typical timeline is what we see with author George R.R. Martin’s “A Song of Ice and Fire” series which is the inspiration for HBO’s “Game of Thrones”. He released the first book of a planned seven in 1996 and we’re still waiting for book six 22 years later. This is also an atypical situation because his story has gotten beyond the books in the television series. Which means the visual version is going to tell us how it all ends before Mr. Martin has the opportunity to do so.

Because of the popularity of these books he also is facing the issue of people who will not allow him to live his life on his own terms. Whenever he posts on his official blog there are always a few responses along the line of; “would you get back to work on the book”. I was going to add the word “please” but these requests are rarely that polite.

There is an even more worrisome level of commentary on the speed of Mr. Martin’s writing that includes the concept that he won’t live long enough to finish as he will turn 70 this September. There is some precedence for this worry because author Robert Jordan did not live long enough to finish his “Wheel of Time” series. I didn’t care because he told a young author, Brandon Sanderson, everything that was going to happen, bringing the series to a satisfying conclusion.

I don’t worry about Mr. Martin’s health. But I think some of getting the ending right might be part of his delay in writing. About a year from now the final season of “Game of Thrones” will have aired. At that point we will know who wins, and loses, the Game of Thrones. It will be the same ending as in the books because Mr. Martin shared it with the producers. I think that has to be monumentally difficult for Mr. Martin. Some of the biggest twists in the story have been shown visually before hitting the printed page. I imagine how much different it is to write out a delightful twist knowing you are the only one who knows it and can’t wait to see how the readers will enjoy it. In the current book he is writing we’ve probably already seen every major twist on the TV screen. He has become a kind of appendix to his own series as the book fills in background and provides texture, but the plot has passed it by. Doesn’t mean I won’t devour it when it comes out, but I will know what’s going to happen; at least the big things.

Which leads me to a short open letter to the author.

Put down the book and leave it alone. Come back to it later; or never. Your story is going to be finished on the screen. Thrill me with something new. Something which excites you to write. Not something which I believe has become an onerous chore. You have one of the most amazing imaginations in fantasy literature. Having it chained to filling in backstory for the next few years is a waste.

I will get your ending on the screen in a year. Make me a new beginning. Just don’t sell the film option until you are done.

One thought on “The Sunday Magazine: Dear George”