Back in 1989 before MTV became an entertainment network and still showed music videos there were two videos which were some of my favorites to watch that year. Don Henley’s The Boys of Summer and Aerosmith’s Janie’s Got a Gun both were directed by the same person. I was reminded of those videos after seeing that director’s latest feature film. The director is David Fincher and his latest film is Gone Girl.

Gone Girl is a movie based on the novel by Gillian Flynn, who also wrote the screenplay. It is a story of married couple Nick and Amy Dunne. Amy goes missing on their fifth wedding anniversary. The movie explores both of their very different journeys. I was thinking about those early videos by Mr. Fincher because I can see The Boys of Summer as Nick’s theme and Janie’s Got a Gun as Amy’s theme. 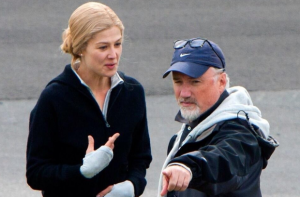 Rosamund Pike and David Fincher on set at Gone Girl

Mr. Fincher has become one of our best movie directors over the twenty five years between those videos and Gone Girl. He has a reputation as a perfectionist asking his actors to do many more takes than usual looking for the perfect nuance. It is a process which has led to the creation of singular set pieces in his movies. The final act in Se7en, the reveal of the twist in Fight Club, Lisbeth’s revenge in The Girl With the Dragon Tattoo, the scene in the bar where Mark Zuckerberg buys into the world of big business in The Social Network. Every one of those scenes requires the actor to show you layers underneath the obvious playing out on screen. That Mr. Fincher is able to do that makes his dedication worth it. Gone Girl is a movie where nothing that you see on the surface is real and Ben Affleck as Nick and Rosamund Pike as Amy are asked to give some of the most layered performances they have ever given. I think Mr. Fincher is responsible for that especially when it comes to Ms. Pike who has never given a performance like this in her career. 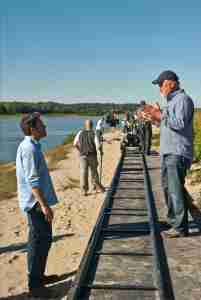 If there is a frequent criticism of Mr. Fincher it is that his characters come off as cold or unfeeling but I think that, again, is a surface judgment. These characters are alight with banked emotions which are kept hidden. In my opinion Mr. Fincher is as close as we have to a modern Hitchcock. Even in true stories like Zodiac or The Social Network where going into the movie I know the story he still manages to involve me within the story and make me see what I know in a different way.

It is very early to be making movie award predictions but Gone Girl is an example of Mr. Fincher synthesizing everything he has learned over the last twenty-five years into something I hope is at the very least recognized with a directorial nomination come Academy Award time.