When I am flipping channels late at night I almost always hear Bruce Springsteen’s “57 Channels and Nothing’s On”. My problem is I eventually reach the movie channels and there always seems to be something on. More often than not it is after 11PM on a work night and I end up staying awake too late. One of my recent re-discoveries was the 1997 film “Contact” based on the book by astronomer Carl Sagan and directed by Robert Zemeckis. 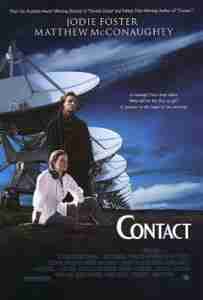 Contact tells the story of humanity’s first contact with an extraterrestrial civilization. What sets Contact apart is that it is not a story of alien invasion but a meditation on the co-existence of spirituality and science. I saw the movie when it came out in the theatre and I remember sensing the disappointment of my fellow moviegoers that there had been no explosions or bug-eyed aliens. Mr. Zemeckis wanted something less sensational and more emotional. Jodie Foster plays Ellie Arroway who is the scientist who discovers the signal. She is the voice of science who doesn’t believe in God because she hasn’t seen evidence He exists. I had forgotten Matthew McConaughey plays the voice of the spiritual, lay preacher Palmer Joss. He is the spokesman of faith over empirical evidence. The themes are approached from many vectors throughout the movie and I think Mr. Sagan’s story and Mr Zemeckis’ direction allow the movie to explore all sides of this.

An example of how they do this is a conversation between Ellie and Palmer about halfway through the movie. Ellie uses the principle known as Occam’s Razor which says the simplest explanation is most often the right one and she has seen no proof of God. Palmer responds with a question for Ellie, “Did you love your father?” when she answers yes he tells her to prove it. It is such an elegant way to describe matters of logic and faith.

Contact was the first movie Mr. Zemeckis did after winning the Oscar for Best Picture in 1994 for Forest Gump. Like that movie he used real footage of the current President, Bill Clinton, and inserted the actors into the video. It gave Contact a real feel of faux-authenticity that surprisingly held up when I watched it recently.

As a scientist who also has faith Contact is one of those rare movies which treats both sides with respect and allows one to think. So if you’re hearing Bruce Springsteen in your head and you see Contact showing on your channel guide press select. I promise you in this case something’s on.