I went to see the new movie from Marvel, “Guardians of the Galaxy”, which is a fantastic piece of filmmaking. The movie is not going to be the topic of today’s column. Instead the movie inspired me to write something different. One of the characters in the movie is a cassette tape given to our hero Peter Quill by his mother just before he is taken from Earth. The tape is labeled “Awesome Mix Vol. 1” and was his mother’s favorite songs from her youth in the 70’s. The music is used ingeniously throughout the movie and the tape shows up as much as many of the secondary characters. My suspicion is if the movie is as successful as I expect it to be all of these songs are about to have a renaissance of sorts for the next couple of months. 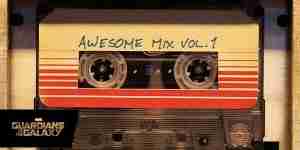 As I thought about the movie I got to thinking what would I put on a tape I labeled “Awesome Mix Vol. 1”. What were the songs of the 70’s I loved? What would make a great mix together? The thought exercise was fun as I sort of let my mind wander to that time in my life most of which was my time in high school and college. What I found as I just sort of let myself free associate was a pretty interesting group of songs. So here are the ten songs I would make a mix tape of to give my non-existent child just before being abducted by interstellar outlaws.

Joy to the World by Three Dog Night– If you just say the opening lines “Jeremiah was a bullfrog” you will inevitably smile. This was the first mega-pop hit I can remember as it dominated the charts during its release in 1971. It is still one of the best-selling singles ever.

Play That Funky Music by Wild Cherry– At the height of disco in 1976 the members of Wild Cherry were at a gig when they received a request written on a napkin, “play some funky music, white boy”.  From that request this song which is one of the most popular examples of funk rock came to be. The bass line, horns, and guitar hook make you get up and boogie.

Evil Woman by ELO– Electric Light Orchestra were one of those hybrids of rock music accompanied by a string section that the 70’s seemed to spawn weekly. ELO lasted because the impresario behind it, Jeff Lynne, had a clear vision of what he wanted. Evil Woman was the first big hit for ELO in 1975. This was not your father’s string section as halfway into this there is a moment where the strings take over for the lead guitar and show they can rock just as hard.

Rocket Man by Elton John– Elton John is one of my favorite artists and it was Rocket Man which was the first song by him that I played over and over on my cassette tape. The song about an astronaut getting ready for liftoff was a product of the post-moon landing generation. The combination of piano and synthesizer make a perfectly otherworldly duet to lay down the vocals over.

The Boys are Back in Town by Thin Lizzy- One of those songs with an insanely catchy guitar hook which lodges itself within my consciousness and sets up shop for days. It is all shimmering guitars and it might have been the first song I actively broke out the air guitar to.

Why Can’t We Be Friends? By War– War was one of those bands which tried to use almost every musical influence available and stuff it into their songs. This was one of their earliest hits which was as pop as War would ever get. The lyrics are hysterical and slyly subversive. 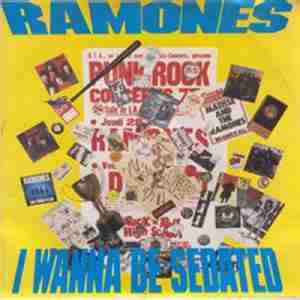 I Wanna be Sedated by Ramones– I had discovered Ramones when I discovered punk music in the mid 70’s but it is this 1979 song which will always be my favorite song by them. It is everything punk rock evolved into by 1979. As a reaction to rock bands with string sections, choruses, synthesizers and orchestras Ramones stripped it down to the basics and ripped it out in two minutes or so. Gabba Gabba Hey!

Under Pressure by Queen and David Bowie– This collaboration by pop icons Queen and David Bowie is in my estimation one of the greatest songs of all-time. Bowie arrived to sing backing vocals on a different song but over time he and Freddie Mercury came up with this rock opera in four minutes of a perfect rock song.

One Way or Another by Blondie– As punk music began to gain traction it was bands like Blondie that helped provide that. Lead singer Debbie Harry had a perfect mix of punk look with the bleached blond hairdo and dark makeup while wearing a little black dress. Safe enough for people to dip their toes in the punk rock pool. Everyone knows about the vocals but Chris Stein’s driving guitar was also integral to this band’s success and in One Way or Another it is all right there.

The Ballroom Blitz by The Sweet– This song was inspired by the time the band was driven off stage by the audience throwing bottles at them. The song itself has a kinetic kind of wind-up similar to the way one might convince themselves to release their frustration. Beware what the man in the back says.

That’s my list. If you want to listen to it and are on Spotify; friend me and you will find it labeled Colognoisseur Awesome Mix Vol. 1 in my account.