I have definitely evolved on the concept of large outdoor installations as something artistic. I know when I first heard of the artist team of Christo and Jean-Claude I thought their idea of art was ridiculous. In 1972 they erected a 24.5-mile fence covered in fabric in California. A fabric covered fence was art? Nonsense I thought. I would soon get a chance to revise that thinking because the artists were coming to my hometown. 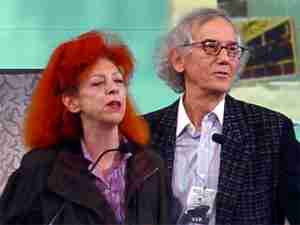 Christo and Jean-Claude wanted to surround eleven small islands in Biscayne Bay with pink fabric. As they started the permitting process in 1981 there was a fierce debate about whether this was environmentally wise. If the money needed was going to drain local arts funding. Finally, was it all just a self-aggrandizing stunt. I can say when this was all being kicked around I was firmly in the camp that this was ego and not art. 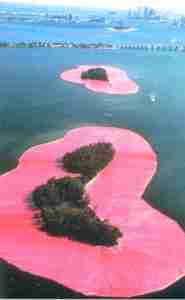 By May of 1983 Christo and Jean-Claude were ready to unfurl their project. Once I actually saw it and experienced it live I was mesmerized. The color of the fabric was an interstitial band between the turquoise water and the green growth on the islands. Each island presented its own unique canvas. The moment which really turned me around was a sunset I was out sailing by one of the wrapped islands. Twilight was falling the lights of the city skyline were turning on as the water was transitioning from turquoise to inky black. In those moments I was treated to a different view of my hometown milieu all because of a few panels of pink fabric. Standing at the tiller of my sailboat my opinion was being transformed as surely as the day was turning into night. I became a fan from then on. 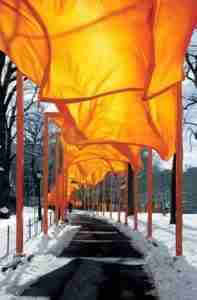 It would be twenty years before I would once again feel the power of Christo and Jean-Claude in person again. In February of 2005 they set up an installation within New York City’s Central Park called “The Gates”. Running throughout the park were gates which held a panel of saffron colored fabric. I walked all the way through all of the gates. What was magical was Mother Nature helped to change things as a snow storm blanketed the ground in white about midway through the two weeks the exhibit was up. It was just after that when I made my second visit to The Gates, again at sunset. Facing west as the sun began to descend it lit up the fabric making them glow. With the stark white snow as a background it was another reminder how these installations provided me unique perspective on that which I know well. 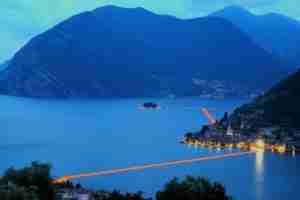 I am reminded of these two moments because the latest Christo and Jean-Claude project “The Floating Piers” just opened yesterday om Italy’s Lake Iseo. For this project a floating walkway covered in orange fabric provides an opportunity to walk on water from the mainland out to, and around, an island in the lake. The picture I saw of it today almost makes me want to jump on a plane. If I did I would make sure to be out on the walkway at sunset because, at least for me, this is when the artistry of Christo and Jean-Claude is at its most vibrant.