If you have been reading this column for awhile you have probably surmised; I like entertainment which scares me. I like all of it. I don’t have a favorite. I just like that moment when a chill runs down my spine in a good version. I do admire those who can scare me without resorting to tricks. If you can do it with smart writing that is something even better. There is a new example of this type on broadcast television in CBS’ show “Evil”. 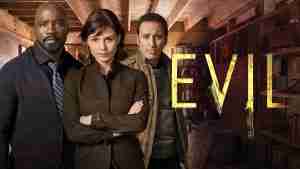 Over the last four or five years the horror genre has migrated to the streaming services or premium cable. It is because they can get away with more than over the air. When “Evil” was announced I was interested enough because of the writers; spouses, Robert & Michelle King. I have enjoyed the King’s writing style ever since I discovered their earlier series “The Good Wife”. They were as much the reason I picked up the CBS All Access service so I could watch “The Good Fight”. Three years ago they tried to make an experimental show work on broadcast TV with “BrainDead”. That show pushed in too many directions at once. I think that has helped them refine their approach when it came to “Evil”. They are still pushing but mostly in one direction; the scary kind.

The premise of Evil is a man who is training to be a priest David Acosta is partnered with a psychologist Dr. Kristen Bouchard. They are employed by the Catholic church to confirm or debunk the supernatural. When you read that you might think “X-Files” and there is a similarity starting with the give and take between believer and skeptic. Actors Mike Colter and Katja Herbers play David and Kristen with that dynamic in front. Each week the show has a “case of the week” along with the way these investigations impact the two detectives in their private life.

The cases have been well-executed twists on classic themes. Including a nod to the poster of The Exorcist. Except in the movie ad it was the priest being silhouetted in the streetlight. Here it is a psychologist arriving to stop the ritual.

There is an overarching plot which ties the cases together and that has become more obvious in these later episodes. The villain is played by Michael Emerson who provides many of the tension-filled moments. He is back to his creepy best as it was when he was on “Lost”.

All together this has turned into an hour of television which has provided those chills I look forward to at least a couple times every episode. There are a couple of very brave writing choices which makes “Evil” the darkest show on broadcast television. At some point there will be a great story on how the Kings convinced CBS to stick with their vision.

If you like scary stories and thought they couldn’t do that over the air anymore try watching the first four episodes of “Evil”. I think you will be surprised at what can still be done to scare you in the dark.