I had my first caiparinha cocktail in 1984 when was at concert at SOB’s in New York City. SOB stood for Sounds of Brazil and this was the club to see the music of the islands and the Americas. My friend who lived there told me to try one and from the moment the drink hit my tongue it was an instantaneous love affair. A few weeks later we found a little restaurant called the Brazilian Connection where the Brazilian-born bartender made the best caiparinhas. Many nights out in NYC began at the bar drinking caiparinhas.

I had always wanted to go to Brazil but when I finally went on my two and a half week trip the quest was to find the best caiparinha in Brazil. I would find it in a beachside stand in Salvador in the state of Bahia north of Rio. This seaside mixologist showed me the secret which I will share with you in a moment. 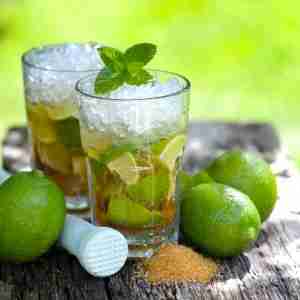 Caparinhas are as simple a drink to make as can be. You takes sugar and lime and mush them together with a muddler or pestle. Once you have a nicely crushed pulp you add ice and pour the liquor known a cachaça over it. Cachaça is pronounced ka cha-sa and is a less refined sugar-cane liquor. I’ve compared it as the moonshine equivalent to rum. That’s a little harsh as cachaça is much smoother than moonshine but it is distilled from fermented sugar cane much as moonshine is distilled from a fermented corn mixture.

The origin of the drink is said to come from Sao Paolo in 1918. It was said to be the treatment for a common cold. I would certainly enjoy a caiparinha over NyQuil any time. The popularity of the drink has spread as it became easier to obtain cachaça. When I was on my trip in the late 1980’s it was difficult to buy and I came home with a case. Now I smile when I see it on my local liquor store shelf. Times change.

I promised you the secret to my favorite caiparinha as taught to me on the beach in Salvador, Bahia. Usually you take half a lime and cut it into four wedges and toss them in over the sugar before crushing. The secret I learned was to use a paring knife to remove the pith and connective tissue and seeds. Leaving mostly pulp and skin. Then you crush that with the sugar and pour in the cachaça.

I have ordered many caiparinhas but it has been only one bartender in Somerville, MA who also knew the trick of removing the pith. I told him where I had learned this and to nobody’s surprise he told me he had been born in Salvador.

If you are looking for an alternative to a mojito the caiparinha might fit the bill. You can also substitute the line with almost any tropical fruit and it is still a refreshing cocktail.

As these final days of summer fly by change up the drink menu before the beach days are gone.