One of the reasons my first car was a Chevrolet Camaro was because of Burt Reynolds. I always hoped to have a fast-American car. I wasn’t interested in a Maserati I wanted a V-8 that roared. I also believed in my mind’s eye I would take it on adventures on two-lane blacktops with the speedometer pegged to its limit. That was all Mr. Reynolds’ fault.

Mr. Reynolds was one of the few actors who made movies about running from the authorities in fast cars. The first movie I remember seeing like this was 1973’s “White Lightning” Nearly the entire last act of the movie is an extended car chase. Mr. Reynolds made it look fun. Whenever I would be sitting in the car parked in the driveway I was pretending to be Gator McKlusky on the run from the law.

Because of Mr. Reynolds’s charisma these movies found a wider audience than expected. Throughout the 1970’s he would build a larger-than-life persona as a “mans’ man”. It was not only evident on the movie screen. It showed up in riotous appearances with Johnny Carson on “The Tonight Show”. It put on display the mischievous streak which always played throughout his characters during this era. It would reach its height with 1977’s “Smokey and the Bandit”. If the earlier films had a specialized audience, this was the movie that broke through. For the next six years there was a movie, or two, which featured Mr. Reynolds behind the wheel of a car. 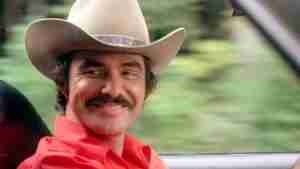 By the early 1980’s the fast car movies had run their course. It would open a new phase of his career as he began to take on more dramatic parts. There was a wide belief that he might not be up to the task. It turned out there was something underneath it all. His Oscar nominated role in 1997’s “Boogie Nights” where he portrayed porn impresario Jack Horner is the best example. As I have re-watched the movie over the years I came to realize how important his performance was. It is the hub through which much of the plot travels.

It would re-energize his career for the final part of his life. It wasn’t a great movie but watching him play Boss Hogg in the 2005 “The Dukes of Hazzard” movie remake seemed like his movie career had come full circle.

I now drive an SUV but occasionally, on a clear day, my mind’s eye transforms things. I am behind the wheel of a muscle car where the sound of the engine rumbling and the tires squealing through the turns is a perfect soundtrack. Hopefully that is what Mr. Reynolds has found in the afterlife.