I dislike the word graphic novel. There is an inherent dishonesty in its use as I believe it is a semantical way to get people to give respect for an art form. I’ve read comic books from the time I could read. They have been, and continue to be, some of my favorite reading material. A lot of time when I see the phrase graphic novel used it usually is a way to allow someone who has disdain for comic books to be able to give respect to the form. I’m on this soapbox because one of the best comic books being published is also being described as a graphic novel. What that means is it is one of the rare comic books with enough imagination for non-comic book readers to be seen with. The series is Brian K. Vaughan’s Saga. 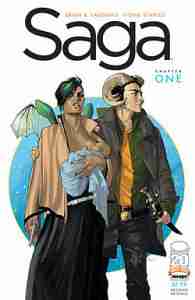 Mr. Vaughan is one of those creative minds that come around rarely in any artistic endeavor. He started his career at Marvel in 1996. In just six years he had already decided he wanted to create and own his own material. He would spend 2002 to 2008 publishing the sixty issues which make up Y: The Last Man. When he ended the run he took a break from comic writing and because of the success of Y: The Last Man he was hired to be executive story editor on the television show Lost for seasons three through five. After his long break from comic books he would return in 2012 with Saga.

Me. Vaughan knows how to plot and to write dialogue that does not sound ridiculous being said in ridiculous situations. Saga is the story of Alanna and Marko who are each from different civilizations which are battling for domination. They also have a child named Hazel who often is the narrator throughout the series. Her narration is one of the more interesting narrative choices made by Mr. Vaughan. In the comic book itself she has only just begun to walk so the narration comes from a future Hazel who knows how things will play out. The couple and Hazel are on the run from both factions in the war. Mr. Vaughan has created a fabulous rogues’ gallery of bounty hunters who are after our heroes. 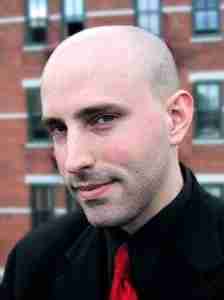 The plot here is the actual successful pregnancy of Alanna giving birth to a child with Marko will have a profound societal effect and so they must be hunted down and eliminated before they can tell their truth.

What is very interesting about the storytelling in Saga is Mr. Vaughan has chosen to release this in distinct arcs of six monthly issues and then there is a little break of three months before the next set of six ramps up. Currently the fifth season of Saga, issues 25 through 30, has just finished. This makes it feel like a comic book version of a pay cable series like Game of Thrones. Each of the five seasons works almost to the same rhythm as those kind of shows with the big events taking place in the fifth issue followed by the fallout in issue six. It is a very different way of telling a story in comic book form. It also allows for easy binge reading in bites of six issues at a time.

Saga has garnered accolades from all over the literary spectrum and deservedly so. It has won the Eisner Award for Best Ongoing Series every year it has been published winning the award from 2013 through 2015. It is a massively impressive achievement.

There now should be no surprise why the graphic novel readers have tuned in. I wish they would just get down off their high horse and join me on the sofa with my comic books.