I usually hold off writing about the new movies until they have been out for a few weeks because I want to talk about plot points freely. With Avengers: Infinity War I realized talking about the plot points at any time would ruin the movie. So, I’m not going to do that. There will be mentions of things shown in the trailers and tv ads as to who is doing things in the movie with who but not the plot itself. I just haven’t been able to think of anything else for the last week since seeing this for the first time.

I have written in the past on how the Marvel Cinematic Universe (MCU) has found the secret ingredient for success; optimism. Leading up to watching Infinity War I watched a few of the movies I thought were the right appetizers. That sense of fighting for what each hero believes is right often at personal cost is written large across the MCU but particularly Infinity War. Our heroes believe in something. They don’t all necessarily believe in the same path to that something. That has allowed for some conflict. One of the things that the MCU has done so well is not to throw away what has happened in the past with a funny one-liner and press the reset button. In Infinity War the stress lines which have existed over the last two years of movies remain and are used for story purposes. Ten years of dangling plot threads are being picked up by the directing team of The Russo Brothers and used as jumping off points for Infinity War in the first act. 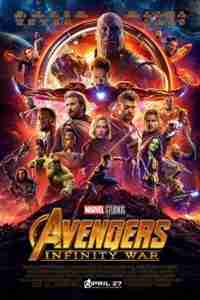 One of the thing The Russos do on a magnificent scale is to make each part of the movie as we move around feel like it is that set of characters’ movie. An example is when the Guardians of the Galaxy arrive on screen it feels like a Guardians movie. When we get to Wakanda it feels like Black Panther has continued. The other part of this is that into each of these settings we add in a few of the other characters. That they mesh so well again speaks volumes about the vitality of the MCU. What I can say is the character who spends the most amount of time with the Guardians needs to be in Vol. 3 because they fit right in as each Guardian interacts with them.

Finally, I am going to end on the villain Thanos. This is the second MCU movie in a row where the villain’s motives are more fully fleshed out on screen. Like Killmonger in Black Panther, Thanos also has a deep personal motivation for seeking out the Infinity Stones. In a movie full of heroes we want to see, that the time is taken to not make Thanos just something in their way is important. It is why when we reach the final act of the movie the stakes are definitively laid out. The audience knows the consequences and why each side is motivated to win.

Infinity War is a fitting culmination of ten years of movie storytelling every beat in the movie is spun from the past decade. The next year is going to be a long one to see how what is left at the end of Infinity War is handled. Based on this movie I have no doubt it will be amazing.