Back at the beginning of the computer age the most speculative science fiction extrapolated the future in a genre called cyberpunk. They would correctly foreshadow a time when the world was more plugged into cyberspace than the real world. The problem is once the real world catches up to the printed page it is time to reset. What this means lately is that new writers are looking at recent developments and wondering what can be extrapolated from its new scientific infancy. Some of the best new science fiction has been considering what the new genetically derived pharmaceuticals might mean for the world. In my mind I’ve begin thinking of these novels as pharmapunk. I’ve been waiting for the novel which captures that. Autonomous by Annalee Newitz is that book. 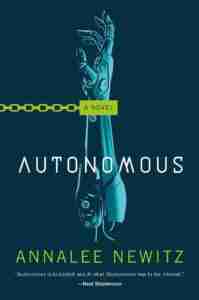 I became aware of Ms. Newitz through her co-creation of the website io9. The name comes from a fictional piece of hardware which allows one to see into the future. The website focused on the intersection between sci-fi and actual science. Ms. Newitz was uniquely positioned as a forerunner of this kind of writing as she straddled both worlds. Autonomous is her first novel but she had written several non-fiction books as part of her early career in journalism. Her background comes out in every page of Autonomous. 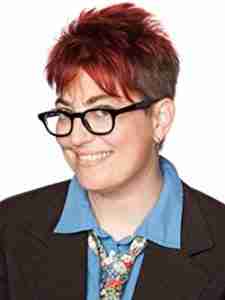 The plot follows two sets of characters as they travel through a post-apocalyptic world. This time the apocalypse comes in the forms of multiple plagues as nature rebels by thinning the herd. The saviors are the drug makers who come up with pharmaceutical solutions and save the world. Naturally, they also take over the world each controlling different economic zones. The world remains safe if they supply the drugs which keep it spinning. One of these drugs is called Zacuity which enhances focus while giving a pleasant emotional reward for tasks completed.

As it is in the present day there is a black market for pharmaceuticals where new drugs are reverse engineered and made illegally. One of our antagonists is one of these pirates, Judith Chen, who answers to Jack. After she starts to sell her underground Zacuity people begin to die. When she discovers that it is a real side effect and not a mistake in her production she wants to engineer a cure and expose the manufacturers.

Law enforcement in this dystopian future consists of robot trackers and their human handlers. The newly minted robot Paladin is put on the trail of Jack. Paladin’s handler is named Eliasz. Some of the most provocative writing in the early chapters is focused on the idea of property and who is owned by whom. Throughout the parallels between owning intellectual property and beings is compared and contrasted. Ms. Newitz plows some new territory within the area of robots being sentient with this perspective.

Gender norms are also highlighted as Eliasz feels an attraction to Paladin but can’t fully let himself go until he determines Paladin’s gender which in a manufactured being is meaningless.

Ms. Newitz places our characters in a Canadian setting where current Canuck touchstones pop up throughout. The more you know about Canada the more Easter Eggs you will find.

Autonomous brims with challenging societal conundrums served up with spare prose. Ms. Newitz writes in a straightforward manner similar to a news article especially when some of the words turn to the higher concepts.

I have been enjoying the whole idea of the pharmaceutical industry becoming the next bleeding edge of science fiction discovery. Autonomous is the first great pharmapunk novel.