If there is one reason for Marvel’s success on film it is because they vary the tone of their films so successfully. They also mange to deploy this variety in a strategic way. For the first film after Avengers: Infinity War the choice of going with a movie that was essentially a comedy in Ant-Man and The Wasp shows this.

The first Ant-Man movie carried with it a comic heist mentality. This formula is repeated in Ant-Man and The Wasp. The biggest difference is the presence of Hope Van Dyne as The Wasp. As portrayed by Evangeleine Lilly she is the kick-ass straight woman. Which is fine because Paul Rudd as Scott Lang has plenty of goofy charm for her to push back against. 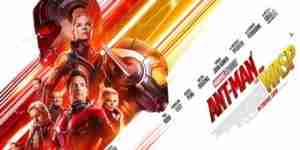 The movie picks up after Captain America: Civil War where Scott has been put under house arrest after his actions in that movie. He is almost to the end of his two-year sentence when of course something arises to make him have to choose to leave the house. That something is a message from Janet Van Dyne who has been lost in the Quantum Realm for over thirty years. It brings everyone together along with a new villain, Ghost, who also has ties to the Quantum Realm. One of the refreshing things about the movie is the self-awareness of how often they keep using the same technobabble phrase. That’s part of what sets this movie apart. It is as close as Marvel is going to get to having a character break the fourth wall and wink at the audience.

The stakes in the movie are appropriately small as our heroes are trying to rescue Janet from the Quantum Realm while people who want that technology for other purposes interfere. For all that they are not galaxy spanning problems I was as invested in their success as any other Marvel movie. This is down to director Peyton Reed who knows how to get the most out of this material.

It all leads to a happy ending which is quite a nice change. If you need a tonic for the Avengers: Infinity War carnage Ant-Man and The Wasp is the ideal prescription.