It will be unsurprising to know that my eyes have been turned towards Orlando over the past few days. Since Thursday Star Wars Celebration 2017 has been going on which means news about all things Star Wars has been coming out over the last few days. It is also the 40th anniversary since the release of Star Wars in 1977. To begin the weekend, they had a panel celebrating the original cast. It was bittersweet because of the recent death of actress Carrie Fisher who played Princess Leia in the original movie. The end of the panel was her daughter Billie Lourd appearing dressed in a Tom Ford Leia-inspired dress making her first appearance since her mother’s death. She gave a moving tribute to how much Star Wars and the fans meant to her family. There was one line in the speech (entire text can be found here) which has resonated with me since I saw the video of it. Ms Lourd said to the fans, “That is why she loved you, because you accepted and embraced all of her; the strong soldier of a woman she was, and also the vulnerable side of her, who openly fought her own dark side, knowing early on that we all have a dark side of our own, whatever it may be.” 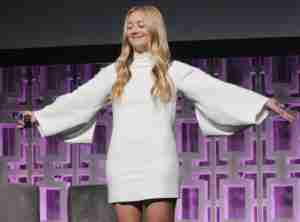 Those words connected with me because I realize that is what I receive from all of my different communities of which I share passions with others. On the night those words were being spoken I was happily among the local Washington DC perfume group gathered at Arielle Shoshana to meet Robert Gerstner of Aedes de Venustas. The perfume was the focus but it is the camaraderie which means as much to me. I walked away with a glow of friendship mingling with the new perfume.

Attending New York Comic Con connects me with a long-time friend once a year which gives us a chance to catch-up. In between, the different panels connect the passionate to their passion. I sit and talk with people from all over the country about something we adore. That common ground leads to learning there is even more than just the initial connection. Importantly that common ground provides an opportunity for different opinions to be listened to. It is an interesting dynamic that has repeated itself multiple times throughout my over forty years of being a fan.

It is only in these gatherings where I truly feel the acceptance of being passionate about something. Nobody questions why I love perfume as much as I do on Thursday night at Arielle Shoshana. On Friday morning at work that acceptance is more difficult to locate. It is why I look forward to each time I can spend time with people who share my interests because acceptance of passion is also just plain acceptance.

One thought on “The Sunday Magazine: Acceptance of Passion”