Mrs. C and I have had standard poodles in the house for nearly twenty years now. All of them have been adopted from rescue agencies. I have loved every one of them to the fullest extent of that emotion. All our previous family members came to us with physical deformities, mostly. There might be some lingering effects of abuse but that was small. A year ago, we picked up our latest rescue, Jackson, and he was full of emotional deformities. Over the past year it has been one of my favorite times with any of our poodles watching him slowly realize he had a family who loved him.

It wasn’t that way at the start. We picked him up on January 2, Gotcha Day. We had been out to visit him the week before to see whether he would be a fit with our other poodle, Henry. Our vet came along to let us know what other physical issues we might face. Jackson’s foster mother warned us he was not fond of men. I was told to leave my hat at home along with any expectations he would warm to me. On that first visit he and Henry played together. Mrs. C and our vet got him to come to them. What I received was a look that would be familiar for the next few weeks; eyes rimmed with white, cut to the side, while panting. To even lay a hand on him I had to lay on the ground while our vet gently moved him towards me. On the way home we decided Jackson would come join us at Poodlesville. 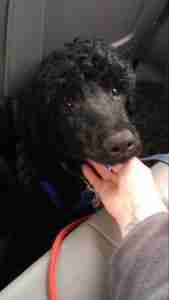 Jackson on the ride home on Gotcha Day

When we picked him up a week later the only one he trusted enough to get in the car with was Mrs. C and only in the backseat. You can see what that looked like above. For the first night in his new home Jackson wanted nothing to do with me. I was always on his radar and whenever I got close enough he moved away. It took remembering that he did relax into my hand once I got him close to me on our previous visit to believe it would eventually work out.. I just had to let him decide when that was going to be. 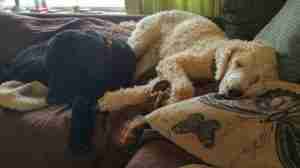 It didn’t take long, a week or two, for the fear to be breached. When I wake up in the morning I grab my iPad and read the news while sitting against the headboard. Our dogs are welcome in our bed, but Jackson had not availed himself of it. Which was why I was surprised to feel him jump up on the bed. As I looked up over my iPad he began something which gets repeated most mornings. He commando crawled up to my crossed legs and laid his head down in my lap. On this first morning I froze. I wasn’t sure what to do. I kept reading and slowly laid a hand on his head, scratching the ear closest to me. Then amazingly he sighed and fell into a deep sleep as I felt the dead weight of his head settle onto my legs. Mrs. C woke up soon after and he jerked his head up jumped off the bed and looked back at her like, “You didn’t see that.” Later that same morning there was still the same keeping his distance from me which had become familiar. 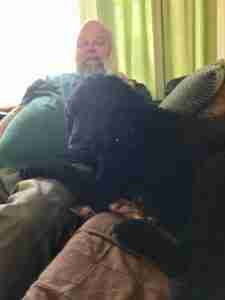 Jackson and I on Gotcha Day + 1 year

From that beginning day-by-day, step-by-step, scratch-by-scratch Jackson and I have built up a typical relationship I have had with my poodles. We now play, tugging on toys, and fetch. He will bark at me when he wants to play. My heart swelled the first time that happened. Deep inside there are still scars and sometimes if I let out a whoop at something, I see the white-rimmed eyes of nervousness. What is different is he shakes it off and returns to me easily.

I have loved all our rescue poodles but the transformation of Jackson over this past year feels like a blessing. It offered healing to both of us. It was a scar for me that I had papered over for far too long. A year with Jackson has left both of us in a better emotional place.

One thought on “The Sunday Magazine: A Year with Jackson”