One of the things those of us who love perfume talk about are “scent memories”. The concept that a smell can connect with a memory and bring an entirely personal subtext to fragrance. One ingredient which does this for me is gardenia. My grandmother had fresh-cut gardenias floating in bowls of water spread throughout her gardenia bush-surrounded Florida pine house. I can’t smell a good gardenia without hearing her voice and seeing her face.

Then this summer, as part of a project I am working on, I was going through vintage formulas of different Guerlains. When I hit the late 1950’s version of Mitsouko Eau de Cologne I had something more than a memory wash over me. I was transported fifty years backward so strongly it felt like a virtual reality had settled over me. What I was remembering so vividly was getting ready to go to Midnight Mass on Christmas Eve sometime in the late 1960’s. It was so vital I stopped what I was doing and wrote it all out before it faded away. Even thought it was the middle of July I realized I had written my Christmas Day 2017 post.

I stood at the doorway to my parent’s bedroom. In my hand was my first real tie. My excitement on attending Midnight Mass was making my fingers fumble the perfect Windsor knot. As I looked in my mother was seated at her dressing table. She had some candles lit while she peered into the halo of electric light around her mirror. For a moment I was watching her without her knowing. My mother was always one of the most assured people I knew. She made decisions without ambivalence. She also stood up and took responsibility for poor choices. As I had a few seconds to look at her I felt like she was thinking deeply about something. She was coming to a conclusion about something. Before the process completed she looked up.

All children will tell you the smile of a parent happy to see you is a joyous thing. On Christmas Eve that smile feels like a gift. As I received this present I held out my hand with the tie. The smile widened a bit and she said, “Let me finish here and I’ll help you.” 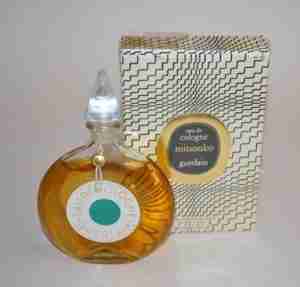 She was still in her pink terrycloth robe and I had caught her at the end of her preparation. All that was left was adding her perfume. My mother only wore two perfumes for as long as I’ve known her. Guerlain Shalimar and Guerlain Mitsouko. She owned the round “bull’s-eye” bottles; red for Shalimar and green for Mitsouko. They had crystal pointed stoppers which were picking up the candlelight behind them. As she reached for the one with the green circle she tipped it, so it would get some on the stopper. She pulled the stopper. On the end was a drop of liquid picking up facets of flame and filament. She drew it to the hollow of her neck where that drop spread onto her skin. She rubbed the stopper against both wrists then returned it to its resting place in the neck of the bottle. She closed her eyes while taking a breath. When they opened a smile accompanied it. She beckoned me over.

She sat me on a stool in front of her chair as we looked into her vanity mirror. She leaned forward as we drew the tie around my upturned collar. I was surrounded by the love of my mother and the scent of Mitsouko. My turn to close my eyes and breathe in.

My mother could have tied the tie for me but instead she carried me through it with her voice. I got it right on the first try. With a final smile at me in the mirror she sent me off to wait for her to finish getting dressed. While I was waiting I realized a bit of the Mitsouko from her wrist had made it onto the tie. It seemed perfect.

That’s what came from my Mitsouko fever dream. I loved going to Midnight Mass with my family. The smell of the incense off the censers. The fanfare from the trumpets. The Latin words said in such a rhythm I knew what was being said without knowing the language. Underneath it all I would be sitting on my knees in the pew under my mother’s arm surrounded by Mitsouko most of all.

This is what makes me continue to love perfume.

One thought on “The Scent of Christmas Past”