Every ten years the British film magazine Sight & Sound asks a panel of critics to vote on the best movie ever made. For many years the film anointed as best of them all has been Orson Welles’ “Citizen Kane”. Although in the most recent 2012 poll Alfred Hitchcock’s “Vertigo” nudged it down to number two on the list. The thing about lists like this is it reflects an extra level of scrutiny over whether the movie is interesting to watch. For my taste Vertigo is a much better film because I enjoy watching it more. Citizen Kane never emotionally engaged me. I admired all of the film techniques and the look of the film Mr. Welles pulled off. It was noteworthy because many of the camera techniques and framing were being done for the first time. In the end I have probably watched Citizen Kane four or five times. I’ve watched Vertigo dozens of times. When it comes to perfume I believe our equivalent to Citizen Kane is Shiseido Nombre Noir. 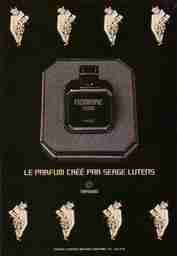 Shiseido Nombre Noir was released in 1982 composed by Shiseido in-house perfumer Jean-Yves Leroy under the nascent creative direction of Serge Lutens. Messrs. Leroy and Lutens decided to go very big with their composition and at the core was a precious osmanthus and an overdose of damascones. Damascones are one of the key components of rose oil. In rose oil they are the molecules which impart that jammy aspect of the best rose oils. On their own as a raw material they explode with kinetic vibrancy and it took an equally unique osmanthus to hold this together. It causes the early part of Nombre Noir to smell like the most expensive lipstick accord ever as another equally inspired choice of orris sets up this rich floral opening. It eventually softens into a really silky honey-based accord by the end.

Nombre Noir was discontinued supposedly due to the cost of producing the bottle which was a strikingly different design for the time period. The truth was more likely the choice of using the damascones in overdose. These molecules are very light sensitive and decompose rapidly upon exposure to light. In reality, the true smell of Nombre Noir is probably only experienced from a sealed bottle for the first few times you wear it. That amount of fragility of the damascones truly make Nombre Noir an unattainable object because even if you find a bottle it is almost surely decomposed. Luca Turin declared Nombre Noir one of the five greatest perfumes ever in his book “The Secret of Scent”. Mr. Turin is the perfume equivalent of the Sight & Sound poll. Bottles turned up carrying hefty price tags and I cringed at what these buyers were getting. 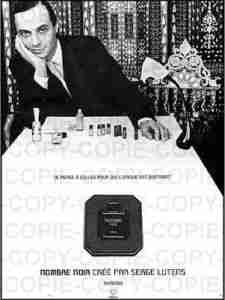 Nombre Noir is just like Citizen Kane for me as it never engages me emotionally. I am not sure something as full of stark planes of accords all intersecting in an abstract kind of snowflake is meant to be emotional. The engineering of balancing the notes and finding the right balance is admirable. There is beauty here but it is unapproachable for me. Ten years later M. Lutens would oversee a masterpiece for Shiseido which is both technically flawless and emotionally engaging in Feminite du Bois.

Disclosure: This review was based on multiple sample of Nombre Noir I purchased or had gifted to me.