If you were on Facebook a month or so ago there was a game going on where you named ten musical acts you saw in concert with one being a lie. Your friends commented with which one they thought was the lie. I decided to do a perfume version where I listed ten long lost perfumes that were extremely difficult to get. My friends are pretty smart and many of them figured out the one which I did not own a bottle of was Jean Patou Lasso.

Lasso was the Jean Patou perfume which has fallen so far through the cracks that it is also very difficult for me to confirm any of the details. It isn’t even listed in the Fragrances of the World database it is so lost. Going by many places on the internet the year of release has been listed as 1936, 1956, and “sometime in the 1960’s”. The perfumer is also impossible to track down although if it was released in 1936 it seems likely it would be Henri Almeras. If it was 1956 Henri Giboulet is most likely as he did 1955’s Eau de Joy and 1964’s Caline. Then in a fantastic article on Fragrantica Sergey Borisov says it is Guy Robert. What’s correct? Nobody is left to unambiguously clear it up. 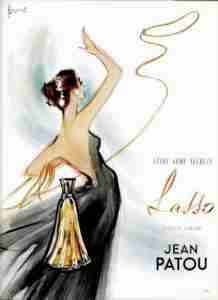 The only thing I know is Lasso exists. Thanks to some kind friends I have generous samples even though in my “gotta have them all” desire to have a bottle of every Jean Patou perfume my collection has a Lasso-sized hole in it. Lasso is not the greatest Jean Patou fragrance it is not even in the top 10 overall. The reason for that is it is the most derivative perfume within the entire collection. When I use a simple descriptive phrase for Lasso I call it a violet-hued butch version of Guerlain Mitsouko. I like it because the violet and leather improve the aldehydes and peach to something different but not so far that, in particular, the opening is very recognizable.

Lasso opens with the aldehydes and peach doing their fizzy fruity dance. The violet comes forth with the same presence as rose and jasmine. This is a classic power floral heart accord typical of any of the decades Lasso is presumed to come from. What becomes the biggest change is a beautifully soft leather accord which envelops the early accords in a sexy refined embrace. This leather imparts a more overt sexuality to Lasso than there is in Mitsouko. The base is a classic chypre again as was seen during the timeframe which Lasso existed in. Which means musky sandalwood, patchouli, oakmoss, and vetiver. Overall it leaves an effect of Lasso being a scent of seduction.

Lasso has 14-16 hour longevity and way above average sillage.

Within the Fragrantica article Mr. Borisov comprehensively covers the details that this was being marketed to women as a way of roping a man might explain why it is such a forgotten fragrance. It might also be the derivativeness. It just might be wrong time, wrong place. Like so much with Lasso it is all lost in translation.

Disclosure: This review is based on samples provided by personal friends.

One thought on “That Unattainable Object of Desire: Jean Patou Lasso- Lost in Translation”