While it would be logical to find a perfume inspired by actress, and perfumista, Catherine Deneuve to be one of the most sought after rarities; I would bet many would be shocked to find out it was an Avon product. What is arguably one of the greatest floral chypres ever made, Deneuve by Catherine Deneuve, did come from Avon. 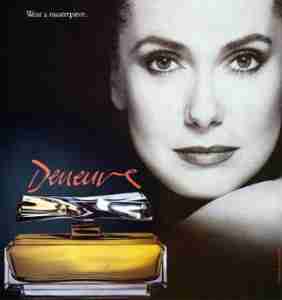 It came from an Avon desperate to change its image in the late 1980’s. Avon was seen as products that your mother owned and the younger generation at that time wanted nothing to do with it. Who did they want to be like? A certain group of them wanted to be like Catherine Deneuve. Mme Deneuve had just starred in the art house horror movie The Hunger as the vampire Miriam Blaylock. Someone in the Avon corporate offices thought pairing Mme Deneuve and Avon in an attempt to make the first Avon branded perfume to be sold in department stores was a fantastic idea. It wasn’t. The door-to-door sales force of “Avon Ladies” complained that their customers would ask them for an Avon perfume they couldn’t sell. The price was above $150/oz. which was beyond aspirational at that time especially compared to the typical Avon perfume selling for less than $10. Avon had no contacts within the department store world and they were seen as arrogant interlopers and thus were blocked from getting the perfume onto fragrance counters around the country. Unable to find it and overpriced compared to other perfumes was a perfect combination for failure. Deneuve by Catherine Deneuve should have disappeared without a trace. 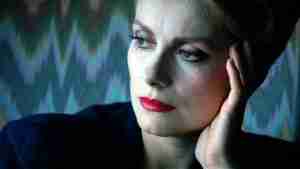 Catherine Deneuve in "The Hunger"

Except a few people got to smell it and it slowly, via word of mouth, became highly sought after. I tried it for the first time in the mid 1990’s when we were at a party discussing the most beautiful actresses and I called Mme Deneuve, “Brigitte Bardot with brains”. My hostess leaned into me and told me the perfume she was wearing was Catherine Deneuve’s perfume. I breathed in a sensual floral chypre hazed over with shots of green. It was heavenly. I would find my bottle of it in one of those mall kiosks with boxes of fragrance stacked upon each other a couple of years later. It is one of my most treasured bottles.

The development of the perfume, as put together from bits and pieces of interviews given by Mme Deneuve was as fraught with incompetence as the ill-conceived distribution plan. The business people couldn’t come to an agreement on what market they were shooting for and it left the perfume sort of stranded in olfactory development hell. Mme Deneuve and perfumer Jacques Veromel continued to work at it diligently. While all the arguing about marketing was going on; Mme Deneuve decided on a final mod. Once they stopped squabbling they found there was a finished perfume waiting for them.

Deneuve opens with a fizz of aldehydes grabbing your attention. Underneath is a green pairing of geranium and galbanum. M. Veromel uses the galbanum at first as a hazy veil of green. It intensifies but so too do the florals as jasmine, marigold, and orange blossom form the floral heart. M. Veromel hit the balance perfectly as the three florals along with the galbanum form an intensely green floral accord that is one of the great middle developments in perfumery. It all transitions into a traditional chypre base full of oakmoss and civet. This ending is everything that a perfume that says sexy to me should be.

Bottles of Deneuve rarely show up on the online auction sites and it is most often found as a mini. Please be careful when buying one of those. As I’ve mentioned in the past aldehydes are notorious for their volatility and in an unboxed mini you will get a Deneuve probably missing those top notes. With that caveat I would still tell you that the rest of the perfume is worth experiencing. I said it earlier and I will say it again Deneuve by Catherine Deneuve is one of the greatest floral chypres ever.

3 thoughts on “That Unattainable Object of Desire: Avon Deneuve by Catherine Deneuve – The Anti-Avon Lady Perfume”