Like a lot of people, I’ve done that mail-in DNA test which tells you about your genetic heritage. Unlike the commercials which show you people finding out surprising things; I was not surprised. On my mother’s side of the family we have had a long-time genealogy which allowed me to go all the way back to a family of Pilgrims named the Lamplighters. The DNA test confirmed that to the tune of 63%.

Most of the rest of my heritage is Germanic. This time it wasn’t a meticulously researched family tree which made me know this. It was the baking my Grandmother did when she visited at the Holidays. I called my Grandmother; GaGa. It was confusing enough that when I first heard the phrase “going gaga” I thought that meant acting like an old person. She was the original Lady GaGa to me and I still giggle inwardly when I see the singer performing.

There is a grand tradition of spiced cookies and pastries attached to German Christmas traditions. GaGa would take over our kitchen and bake them all. While not precisely gingerbread I think my life-long love of gingerbread sprung from these Holiday treats. 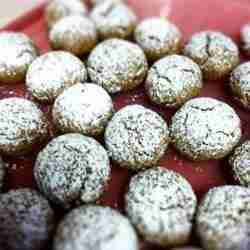 One of my favorites were the little powdered cookies called Pfeffernusse. GaGa gave me some of my only German heritage lessons by teaching me how to pronounce the treat. It isn’t “feffer-noose” it is “feffer-news-ah”. Those who want to skip the pronunciation thing altogether can just call then German Gingerbread or German Spice Cookies.

GaGa’s secret ingredient was a spice mixture she brought with her in a clear jar. It was her special mixture of cinnamon, clove, ginger and other things. It is that piece of the recipe I have never been able to replicate. When I make pfeffernusse they are fine but not great. GaGa’s pfeffernusse were great. 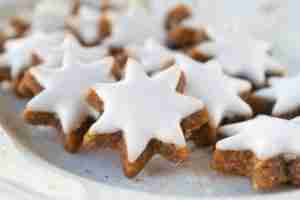 At least pfeffernusse I can try and make. It was the other cookie which is my favorite called Zimtsterne.

What sets these apart is they are flour-less cookies. The replacement is ground almonds until it reaches the consistency of flour. This was one of my favorite parts of helping GaGa bake; pulverizing the almonds. She would put them in a clean towel and use a baking pin to bash them at first into little pieces. Then I could join in standing on a step-stool so I could roll the pin back and forth. GaGa would sift the mixture saving the bigger pieces. Then she would add her spice mixture. After she would make the dough and roll it out, I took the star-shaped cookie cutter and went to work. As I cut them GaGa glazed them. The cookies had to sit overnight before baking. The next morning, they would bake while we ate breakfast.

I can make Pfeffernusse but I’ve never really given Zimtsterne a try because of the almond part of it. I do search them out and there is a good German bakery where I always get some every Holiday season. It reminds me of GaGa and my German heritage.