When I am at a perfume fair like Pitti Fragranze I never know when I am going to be surprised by a new brand. I try to prepare myself by reading through the program before meeting with the perfume brand representatives. Early on the second day of this past September’s Pitti I had an appointment with Zarko Ahlmann Pavlov the owner and self-taught perfumer behind ZarkoPerfume. The goal of ZarkoPerfume was to make fragrance for the Nordic audience and especially his current home country Denmark. I have heard this story before from perfume lines from this part of the world before and there has only been one which I thought lived up to the inspiration. All of this was not raising my expectations but that is why you make the visit. Once I sat down with Mr. Pavlov and in the months since my return had the opportunity to wear all five, Molecule 234.38, Pink Molecule 090.09, e’L, Inception, and Oud’ish I am more than a little surprised at how much I like almost all of them.

Of course any perfume with molecule in its name is likely to tickle me. Molecule 234.38 is supposed to be a single synthetic raw ingredient of molecular weight 234.38. When I first walked around for a day with a bit of it sprayed upon my skin, in Florence, I did think this was a single synthetic musk molecule. Once I had it home and wore it for a few days there are a couple more things at work here. At the core is a single large molecule and there is never a moment when that isn’t apparent. But there is also a tiny bit of a floral synthetic early on and sandalwood much later on. While I have enjoyed the previous fragrances which feature a single molecule I am happy that Mr. Pavlov chose to add a very simple bit of framing to his central synthetic. I would also point out that there is at least one or two more synthetic musks around as well. If you are not fond of synthetics stay away. If you are interested in seeing how a typical cocktail of synthetic white musks can develop over many many hours this is a fascinating perfume.

Pink Molecule 090.09 is a schizophrenic perfume that Mr. Pavlov wants to evoke “pink champagne” and “the dark trees of Denmark.” What he has realized is more of a mixture of St. Germain elderflower liqueur and a polished wood cabinet. The slightly bitter elderflower dominates the opening with a bit of apricot adding some tart sweetness to leaven the bitterness. The promised pink molecules arrive swathing the elderflower in a synthetic aquatic feel. The base notes are the dark woods of mahogany, synthetic sandalwood, and another woody synthetic. This was unexpectedly fun when I wore it. The elderflower aspect was really pleasant on the slightly cooler days I ended up wearing it. 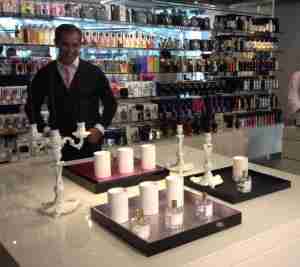 e’L is the only one of these first five releases which never fully came together for me. Meant to be a Danish version of the modern “on the go” woman’s perfume it tries to do too much. It careens from pomegranate and floral to ozonic notes over green tea in the heart. This whole transition clunks with a grinding of olfactory gears. It settles down into a woody musk base but everything up to that didn’t work for me.

Inception has a lofty goal of re-creating the dream levels from director Christopher Nolan’s movie of the same name. During the movie the heroes invade people’s dreams and in each successive layer as they go deeper time moves at a much slower pace. Inception the perfume does the same thing with three differing distinct layers as you go deeper The top notes are a fast moving mix of tart citrus, a bit of cardamom, and a translucent green accord. Almost as fast as you notice all of it, it goes down a level where the same ozonic accord which didn’t work for me in e’L works perfectly here. This time it captures a deep breath on a cold day; crisp almost mentholated. Matched with it is a floral accord of fresh character. It is a level deeper than what was on top. The final level is a descent into woods as sandalwood, balsam, and oak combine for a final phase deep in the forest. It is up to you to decide if the top is still spinning.

Oud’ish is the best of these first five releases. Even if I didn’t love the name, and I do, this is the most complete fragrance composition by Mr. Pavlov. Each part of it feeds into the next harmoniously. Oud’ish also works because it is kept very simple. It opens on a transparent green tea accord. It lilts and floats throughout the early moments. An ambergris accord comprises the heart and it is also kept on the sheer side. The base is primarily a cocktail of white musks and to all of this is added the tiniest amount of oud. It is mainly present to add a bit of exotic texture to the musks. Mr. Pavlov keeps the entire perfume light and I thoroughly enjoyed wearing it on the days I had it on.

Because of the high amount of synthetics all of the ZarkoPerfumes have ridiculous longevity 14-16 hours at the least and in the case of Molecule 234.38 over 24 hours. The silage is also quite modest for all five. Someone will have to get quite close to know you are wearing these.

Mr. Pavlov has started well with his inaugural releases and if I only had to own two it would be Molecule 234.38 and Oud’ish. For very different reasons. I look forward to more from ZarkoPerfume I believe there is much more Mr. Pavlov has to communicate via perfume about Denmark.

Disclosure; this review was based on samples I received at Pitti Fragranze.

Italy is blessed with two of the best perfume fairs in the world and Pitti Fragranze is the one which occurs in the fall. Ever since I knew about the existence of Pitti Fragranze in Florence, Italy I have wanted to attend; for the twelfth edition I finally made it. It was a wonderful experience for me as most first times are. I will split the final wrap-up into two parts talking about some of the people and trends along with some disguised teases of things I was given sneak previews of. Tomorrow in Part 2 I’ll call out the top 10 new perfumes I tried.

The first person I met in the first minutes of my first Pitti Fragranze was Andy Tauer. It was a special delight to have the opportunity to chat with him in person. I have always considered Hr. Tauer to be one of the founders of independent perfumery. After nearly ten years of doing this he still has a beguiling passion for creating perfume which comes through even more strongly in person. It was nearly the perfect way to start my experience.

One of those independent perfumers who has helped infuse independent perfumery with a signature style is Pierre Guillaume. He was another whom I never met in person before. When we started trying his new perfumes early on Saturday morning we had a great time laughing and discussing not only his latest but a couple of things he made just for the booth. It will be hard to wear a perfume by M. Guillaume from now on without hearing his laugh and sensing the joy in his creations.

Another person I was happy to meet was Georg Wuchsa of Aus Liebe zum Duft/First in Fragrance. He has been so supportive over the years in getting samples to me I was happy to have the chance to thank him even if it was a sort of hit-and-run encounter on the last day.

When it comes to new trends one stood out very vividly to me as I worked my way around the booths. Tuberose is the new Oud. It often felt like every other brand displayed a perfume to me containing noticeable levels of tuberose. One of the reasons for that is I think the perfumer’s palette has been expanded with new extractions of tuberose which allows for wider latitude in composing with a note which can be very intense. I smelled tuberose after tuberose but I barely smelled any new ouds. Even the Zarkoperfume Oud’ish seemed to be reluctant to display its oud outwardly. 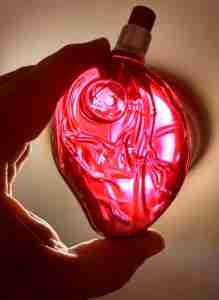 Another trend is the unique bottle is back. The redesign of the new Mona di Orio bottles fit in my hand with a weight and presence. The Pierre Dinand designed bottles for Neela Vermeire Creations gives that entire collection an elegant container for the equally opulent contents. Pierre Dinand was also the man behind what has to be my favorite bottle of the whole fair. When I was making my first circuit of the floor I was stopped dead in my tracks by a set of three heart shaped bottles by the new brand Map of the Heart. That one of these hearts also contained one of the best new perfumes of Pitti just turned it into the complete package.

Finally I did get some confidential information that I am going to share as what are called “blind items”. These are teases with most of the identifying information about who and when disguised.

One perfume brand showed me two upcoming releases one of which will take the brand in a different direction.

One perfume brand showed me the very distinct architectural inspiration for their next release and just the visual has me excited for what is to come.

One perfume brand showed me the final version of a perfume I have long been waiting to smell. It surprised me at how it was realized but the tiny area of skin it was on might have been my most sniffed patch of skin throughout the entire exhibition.

One perfume brand is going to make their take on the cologne and it is one of the best I have smelled in the Nouveau Cologne category.

Come back tomorrow for my top 10 new perfumes from Pitti Fragranze 2014.

Here are links to the live recaps of Day1, Day2, and Day3.