Yosh Han is one of those people in perfumery who seems to be in constant motion. Whenever I see a post from her on Facebook I play a mental game of “Where in the World is Yosh Han?” All of this travel is as a consistent proselytizer for independent perfume. Ms. Han believes in the indie perfume community and always is available to promote it. She is so good in this role I sometimes forget she is a damn good perfumer, as well. Then I received a sample of her latest release Konig and I am immediately reminded that Ms. Han has got skills.

Konig is the German word for king and Ms. Han wanted to create a fragrance fit for a medieval king of the Schwarzwald. Certainly the woods and the smoke of the fireplace are on display but the inclusion of an excitingly unusual red apple note really allows Konig to feel less medieval and more modern. 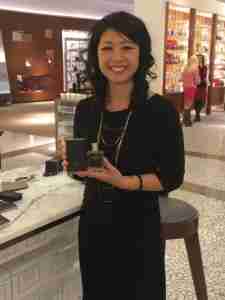 Konig opens with those apples as the crown on this king. Because of the apples I kept thinking about princesses and poison apples but Ms. Han has some more masculine ideas as vetiver shows up to joust with those apples. The greener facets of vetiver are supported by papyrus and sage early on and they add tartness to the apple. The woodier aspects of vetiver come forward and so too do the smokier accords accompanied by leather and amber. At this point ‘dem apples have been jettisoned and the ending stage is a smoky leathery vetiver, the epitome of the swaggering medieval king at play, or war.

Konig lasts all-day on me and has above average sillage.

Konig is the second in the “M” Series by Ms. Han which are meant to explore our “deepest nature”. Sombra Negra was the first and in tandem both of these are distinct departures from the earlier collection Ms. Han produced. What they also show is that Ms. Han knows how to span an aesthetic spectrum when making her perfumes. Konig shows this excursion into the “M” series will be every bit as fascinating as her previous fragrances.

Disclosure: This review was based on a sample of Konig provided by Yosh Han.

Editor's Note: Yosh Konig has been named a finalist for the 1st "The Art and Olfaction Awards" in the Independent Category.