One of the most important sentences I write in every review is that which contains the longevity and sillage of the perfume I am writing about. I tried leaving it out and the vox populi let me know it was missed; a lot. It is an interesting set of statistics and I worry that it carries too much importance but the readers and the customers should have the information they want. Which makes it difficult for me to write about fragrances which last less than four hours. Although if it is a Discount Diamond it might go down a little easier especially since you can get 100 ML of this month’s choice, Yardley English Lavender, for around $10.

I like these short-lasting perfumes because they can be worn for just a morning, or an afternoon, or in the evening. When it comes to Yardley English Lavender it is my raking leaves perfume. I spray myself liberally and go out and rake leaves on a couple of chilly fall afternoons. By the time I come in and take a shower it is gone but not forgotten. 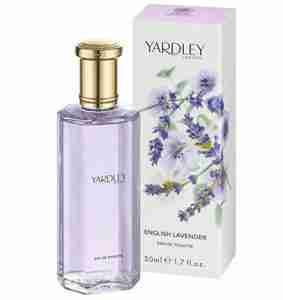 Yardley English Lavender is one of the original perfumes of the late 19th century opening the new age of modern perfumery. Created in 1873 it has been re-formulated twice in 2010 and 2015 by perfumers Paul Fraysse and William A. Poucher. It was one of the perfumes my grandmother wore which I always associated with her. Lavender has become one of my favorite florals over the years and I re-visited English Lavender right before the end of the 20th century. It quickly became a favorite choice for a quick boost of fragrance on a busy day or night. It is a simple construct designed to accentuate all the facets of lavender.

It opens with bergamot providing an amplification of the fresher nature of lavender. It transitions to clary sage bringing out the herbal nature. It is joined by a very crisp cedar which brings out the slight camphor-like undertone in lavender. A bit of musk reminds me that there is an animalic heart deep inside the purple spear.

The biggest difference I have noticed in my versions is the musk used in the base. The earliest versions have a more animalic one. It has given way to a typical white musk in the latest version I tried. English Lavender is an example of the enjoyment that can be gained from embracing the transitory.