In the fall of 1986 I remember going to my local comic store to pick up that week’s new issues. Stuck in my bag was an issue I hadn’t requested. It had a picture of a smiley face button with blood spatter on it. I looked at the owner and he said, “I think it is going to change the way comics are seen.” I remember snorting a bit at that. At that time reading comic books was seen as my being unable to let go of my adolescence. What that issue would begin was a difference in the way comic books would even be called. From that point on there would be graphic novels. The story which began that was Watchmen by writer Alan Moore. 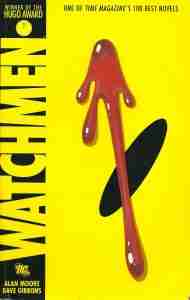 The story tells of a world where superheroes exist, and they aren’t necessarily admired. Set against the backdrop of Cold War politics and an America where Richard Nixon is serving his fifth consecutive term as President. The story begins with the death of Edward Blake. Unknown to the general public he was also the costumed hero The Comedian. One of his compatriots believes someone knows the other heroes’ identities and is beginning to try and kill them. The story moves forward as it alternates origin stories of each hero with issues which move the current mystery forward.

Besides the normal pages of panels which told the story in art and word bubbles each issue of Watchmen also had supplemental material. Mr. Moore would add in reproductions of letters or dossiers all adding depth to the story. The best of these was a story told entirely in text called “Tales of the Black Freighter” It was a macabre pirate story with a twist at the end which was a mirror to the characters in the main story. As a reader the question I always had was which character mapped to which one in the pirate tale. Mr. Moore made it ambiguous enough it was only in hindsight that it would become clear.

As much as I am laudatory towards the story, artist Dave Gibbons was the final ingredient to why this was so different. The most widely cited example of this is issue #5 entitled Fearful Symmetry. Mr. Gibbons laid out the pages so they would be roughly analogous reflections of each other so first page mirrored last page and so on. It is only made clear this is happening when you reach the middle of the issue and see the symmetry on either side of the stapled spine.

That my comic book seller was prescient has been the way Watchmen has been praised. It is called a graphic novel because it is included on lists of the best novels written. It deserves every bit of praise. It is the reason I have so much interesting reading thirty-three years later as it has spawned the current age of graphic novels.

I wanted to write about this as HBO is about to release a new version of Watchmen extrapolating from the end of the graphic novel. I will definitely be writing about it once it has finished. I wish them luck. I will be watching and wondering if this creative team can live up to the legacy they are continuing.