Just like there are perfumes I only wear in the summer when it comes to wine it is the season when I do the majority of my white wine drinking. One reason is because it can be served cold. The other reason which mirrors my fragrance selections they are lighter in body without sacrificing complexity. The only drag about this is my white wine rotation has become a rut of New Zealand Sauvignon Blancs, Pinot Grigios, Rieslings, and the occasional non-oaky non-malolactic Chardonnay. There’s nothing wrong with that but to break out of my routine I wanted something new. It showed up on my radar at the end of last summer but so far this year I have been spending most of the early summer drinking Txacoli white wines from Spain. 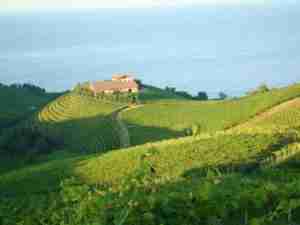 Before you ask Pat to buy a vowel the name is pronounced cha-co-lee. They come from the Basque country in northern Spain right where it borders France. The grape used, Hondarrubi Zuri, thrives in the mineral-laden soil which is kept temperate by the breeze coming in off the Bay of Biscay. Because of the conditions the wine is produced to be drunk immediately. It also carries a natural effervescence after aging in the bottle. Along with its lower alcohol content it is like a natural white wine spritzer.

What draws me to them is something I experience in the mid-coast California white wines; a kind of taste of the sea. There is a bit of salt air within the wine.  It is like drinking at the beach while I’m on my deck. I’ve tried three different brands and they are all available in the $15-25 range. 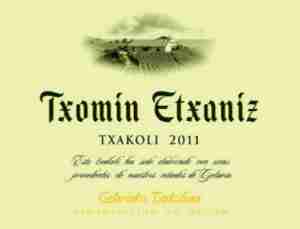 The first one I tried was, get ready Pat I’m going to need some vowels, Txomin Etxaniz, Txakoli de Getaria. It has a weird doughy nose along with citrusy undercurrents. On the tongue there is a frisson of effervescence as apple and lemon rise from the fizz. As refreshing as I can ask for in a summer white.

I mentioned the salt air quality; Itsasmendi Bizkaiko Txakolina is the one which has it in spades. This is all fresh crisp fruit on the nose. This time the fizz feels like sea foam as the wave of citrus and apple crash onto my palate. If you like the sea air quality, as I do, this one will become a favorite.

Gorka Izagirre has the most different releases in my area. The one I’ve been drinking is the Bizkaiko Txakolina. This one is the most complex on the palate of the three as after the fruit and fizz pass there are some lovely herbal nuances. We’ve had this with garden-grown tomatoes, basil and fresh mozzarella which that finish goes perfectly with.

If you want something outside of your normal white wine routine give the Txacoli whites a try.

Disclosure: This article based on bottles I purchased.