My tradition on Christmas Eve for the last five years as a blogger has been to give Clement Clarke Moore’s ‘Twas the Night Before Christmas a fragrant spin. This year I have been inspired to do something slightly different. You will recognize the plot below as somewhat similar to Mr. Moore’s Holiday classic except this time there have been some other influences mashed up with it.

‘Twas the Night Before Christmas

It is Christmas Eve in Poodlesville. Colognoisseur has finished trying to find the mythical perfume Eau de Chandelier for another year. The magical extrait said to be a collaboration between, Beaux, Almeras, Guerlain, and Coty has not been seen for over one hundred years. Colognoisseur is headed to bed……

With a sigh I got up from the desk. As I walked through the house all I noticed was the silence. I looked at the stockings on the chimney, hung so neatly, as I turned off the lights on the Christmas tree. The poodle was curled up tight, breathing easily, completely asleep.  I was smiling at Mrs. C as she settled her kerchief. I had just doffed my fedora still thinking about Eau de Chandelier when an incredible racket was heard outside.

I ran to the picture window and looked outside on the moonlit night to see something amazing. A sleigh being pulled by eight flying reindeer. Could it be? Was this really Scent Nick? Just as the thought formed he began to call to his coursers, “Now Mitsouko! Now, Joy! Now No. 5 and Polo! On Kouros! On Fracas! On Diorissimo and Femme! Head for the roof!”

As I heard the hooves on the roof I looked towards the fireplace. With a cedary whoosh Scent Nick was standing in front of me. He was dressed in a red coat and pants with a white fur collar and trim. I could hear the tinkle of delicate bottles in the bundle on his back. His eyes sparkled like the finest bergamot. His dimples were as merry as a luscious vanilla base note. His cheeks resembled Rose de Mai. His nose was as red as a raspberry. There was a sly smile surrounded by a snow white beard.

He pulled the pipe from his mouth and let out the most infectious belly laugh. It sounded almost like he was saying “eau, eau, eau.” I had to join in. As his eyes met mine I could feel the magic in the air coalescing. Without speaking a word, he reached into his pack and held out a bottle half full of an amber elixir topped with an ornate brass stopper. 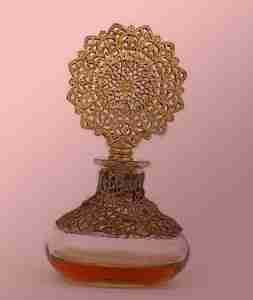 I was gobsamcked. There it was! Eau de Chandelier! He carefully transferred a few drops into a vial. I could swear there were sparkles surrounding the liquid as it was added drop by drop. Scent Nick dropped the vial in the stocking which read “Colognoisseur”.

I realized we hadn’t said a word and before I could ruin it he laid his finger aside of his nose and he was gone. I heard him whistle and the reindeer sprang off the roof. I ran out into the night to watch them fly away. It was then that he spoke his only words to me, “Happy Christmas to all, and to all a good night!”

As I come near to finishing my second year of Colognoisseur I want to wish all of my readers the most magical of Holiday seasons. If you find yourself needing a little scented magic keep an ear peeled as you are falling asleep this Christmas Eve. It is in those moments where Scent Nick and Eau de Chandelier exists.