I have had satellite radio in my car for over ten years. One of the things I particularly enjoy about SiriusXM is when they have an artist specific channel for a month or two. Recently I’ve been listening to the one dedicated to Billy Joel. What attracts me to it is they usually edit in interview clips about songs as well as a show called “BJ the DJ” where Mr. Joel will talk about the artists that influenced his music. It can be really entertaining when he shows you the similarity in tempo change between the Beatles “Day in the Life” and his own “Goodnight Saigon”. Listening over the past few weeks I have come to appreciate again the album which I think I like the most, “Turnstiles”. 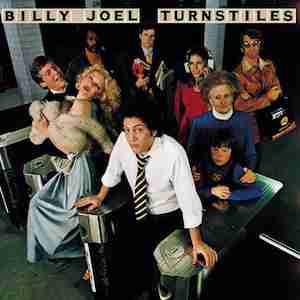 “Turnstiles” was released in 1976 as his third album. It was just before his star would really ascend with the release of “The Stranger” a year later. One of the things I have realized re-listening to Mr. Joel talk about it and to the music is how this album defines the breadth of the material to come. “Turnstiles” was recorded after Mr. Joel decided to return to New York after his time in LA.

That is represented in the first song “Say Goodbye to Hollywood” where he bids a lyrical farewell to a city he never really liked. His affection for his home would come in three songs inspired by New York; “Summer, Highland Falls”, “Miami 2017 (Seen the Lights Go out on Broadway)”, and “New York State of Mind”. That last song has become one of Mr. Joel’s signature songs as well as a musical representative of New York City. Re-recorded by many who also love NYC. I like it better than the other NYC song “New York, New York”.

Another interesting aspect of listening to the Billy Joel Channel is he talks about his playing techniques. I remember seeing him playing “Angry Young Man” in concert. It stars with him using his thumb and forefinger pressed together to attack the piano keyboard in a ferocious staccato. It is one of my favorite intros. In one of the recorded bits it was inspired by the drum solo from the song “Wipe Out” by The Surfaris. Once I heard him say that while both songs were played back-to-back it was impossible not to see it. There is another technique I enjoyed that seemed to especially show up in many of Mr. Joel’s early songs. He had a way of rolling his fingers into a glissando effect on “Turnstiles” you hear it on “Summer, Highland Falls”. He calls it “banjo fingers” because he is trying to emulate the strumming of a banjo on the piano.

If you have access to satellite radio and enjoy Mr. Joel take some time to switch over and listen to one of the great rock musicians talk about his music. It made me go back and spend time outside of the car with it; especially “Turnstiles”.