No matter what it we enjoy there is always a part of it that a person likes that is usually not shared by others. These are usually called guilty pleasures. They are the bad movie you love, mine is “Buckaroo Banzai Across the Eighth Dimension”. At least for me, almost all of my guilty pleasures are overstuffed packages trying to do too many things at the same time. In fragrance I have them and they are definitely found in the discount bins. My favorite perfume guilty pleasure was found in the perfume equivalent of flipping channels at 2AM, digging through the perfume bin at my local discounter chain. As I was doing that one day I came across a blue bottle with a bit of rope wound around the cap. I looked at the name and had remembered a spirited discussion on a couple of the forums saying this was better that you might think. That was enough for me to liberate it from the olfactory hinterlands and bring it home with me. That perfume is Tommy Bahama Set Sail St. Barts for Men. 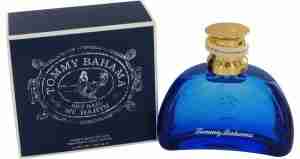 Tommy Bahama is best known for the Hawaiian shirts which carry the brand but over time it has branched out into other areas. In 2005 the released a pair of Tommy Bahama perfumes one for men and one for women. Every year for the next five years they would release a pair of men’s and women’s perfumes. The third set was released in 2007 and called Set Sail St. Barts. Perfumer Richard Herpin was asked to employ a tequila accord in both the men’s and women’s perfumes. This pair is a good example of how things can go right and how they can go wrong.  In Set Sail St. Barts for Women M. Herpin tried to mix the tequila with some strong tropical florals on top of a musk cocktail. It was like waking up in a flower shop after having had a few too many tequila shots. As a floral mixed with tequila it just didn’t work. For Set Sail St. Barts for Men M Herpin got rid of the flowers and replaced them with aquatic and fruit notes. This time everything works as it felt like sitting in a beach chair under a palm tree with a bunch of lime, a bottle of tequila, and tropical fruit.

Set Sail St. Barts for Men opens with the bite of lime on top of an ozonic accord mixed with aquatic chords. It is a typical aquatic opening matched with citrus. A bit of wet green comes next as the kelp floating on the water’s surface comes to the foreground. Then a really lush tequila accord which contains a rough synthetic edge to it. This is raw unrefined tequila bought from the local market. M. Herpin matches it with a juicy tropical fruit synthetic. He calls it guava in the note list I get more mango or papaya from it. A woody base note reminiscent of a coconut palm heated by the sun anchors the base with some white musk and vanilla thrown in to add some depth.

Set Sail St. Barts for Men has 10-12 hour longevity and above average sillage. People will know you are wearing this.

There is nothing terribly original about this fragrance but it tickles me in some undefined place. I wore it for the first time this year over the past Memorial Day weekend and just like seeing the opening credits to Buckaroo Banzai it brings a loopy smile to my face, even if I’m the only one grinning.