There has been an interesting trend among the Tom Ford Private Blend collection; flankers.  In what has been one of the, arguably, most influential perfume collections the recent choice to release flankers stands out. In most of the cases it has been to make “intense” or “eau” forms indicating darker or lighter. The ones they’ve chosen to do that with allow for a choice between styles with similar construction at different volumes. The sub-collection which has seen the most flankers are the blue bottled Neroli Portofino collection. These flankers have had “acqua” appended to their name. While it might seem natural to think this means aquatic it generally doesn’t. It means a subtle shifting of ingredients. It makes it a true kind of flanker. This month’s Flanker Round-Up covers the two most recent additions to the neroli Portofino sub-collection. 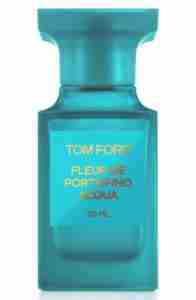 The same summery citrus mélange is back in all its glorious tart juiciness. The difference is violet leaf is given more presence which teases out the green undercurrents inherent within the citrus accord. The key combination in the original was the honey nuance of acacia attached to honey in the base. For Fleur de Portofino Acqua, orange blossom joins with the acacia in equal presence. It provides a clearer connection to the citrus on top through to the honey in the base. 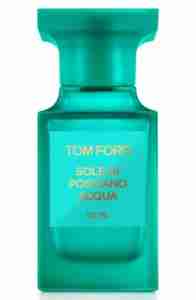 Sole di Positano is more emblematic of the overall Mediterranean aesthetic which runs through the Neroli Portofino collection. Especially with the classic citrus-floral-woody axis upon which many of this type of fragrance spins upon. Sole di Positano Acqua doesn’t disrupt this but it adds a little more to the bones of the original.

Sparkling lemon and bitter orange open the new version with an enhanced amount of shiso leaf. The sharp green quality of the shiso finds purchase among the brilliant tartness of the lemon. It accentuates the sunniness of the citrus. In the original I mentioned I liked the use of the lighter versions of jasmine and ylang-ylang. In the new one, versions of both florals which have a slight tint of the indoles inherent in both are used. It works because of the presence of the higher concentration of the shiso. It all coalesces into a sandalwood base with some moss growing on it.

Sole di Positano Acqua is an overall greener version than the original.

Disclosure: this review was based on samples provided by Nordstrom.