It was a couple weeks after Labor Day 2016 and we were having our last backyard soiree. I had an array of new botanical gins I had just unearthed. I asked one of the later arrivals to please bring some tonic water. As sometimes happens tonic water turns to soda water in the process which happened this time. Faced with a dilemma I decided to try out my panel of gins on a different cocktail. What happened would remind me that the best answers are sometimes the standards as I re-discovered the cocktail known as the Tom Collins that day.

I have always loved the story of how this cocktail came to be. In 1874, there was a joke that the men who were out in bars played on each other. It went like this. As a friend would walk in to the bar you would begin to shake your head in dismay. As your friend arrived and asked what the look was for you would tell him this guy Tom Collins is telling people you have the ankles of a girl and your father was a blacksmith. In 1874 that would send our dishonored man off in search of Tom Collins who did not exist. Somewhere during the heyday of this prank an enterprising New York bartender decided to make a drink named after the man everyone was looking for. 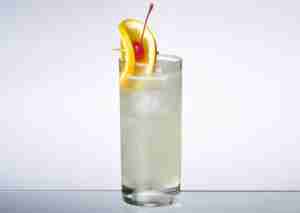 What this bartender came up with is the best alternative to Gin & Tonic for a summer drink. It is simple as you add a shot of gin, an equal amount of lemon juice, and a half shot of simple syrup into a glass filled with ice. Stir. Then top off with soda water. What I discovered last year is with the advent of the small-batch botanical gins that are out there the Tom Collins is an excellent platform on which to display them. For alterations, you can substitute lime juice for the lemon juice. You can add in almost any herb growing in the garden. I’ve found a bit of crushed basil, thyme, and rosemary add a lot. This is especially true with the new gins. We also found a float of St. Germain elderflower liqueur or Crème de Violette also added something to the mix.

As I spend the first summer weekend looking out over the backyard as the poodles run, the ribs smoke, and the sun shines on Poodlesville I am purposefully buying soda water; for this is going to be a Tom Collins summer.