I’ve spent a lot of time in this column talking about the ending of pop culture things. How does a creative person finish without sputtering out? This week saw an amazing example of how to finish on a high note with integrity as author Robert Kirkman brought to an end his comic series “The Walking Dead” with issue #193.

The ending was a surprise to everyone. Mr. Kirkman and his longtime artist collaborator Charlie Adlard even submitted covers for issues past 193. Like everything in The Walking Dead universe when it ended it came with a shocking finality. I’m not going to go into the plot because as fascinating as the story was the column Mr. Kirkman wrote explaining his decision to end here was just as interesting. 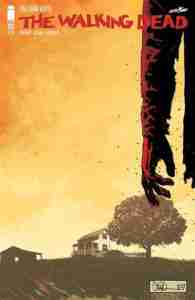 In that column he felt like ending the story like this was an authentic piece of the zombie apocalypse universe he had created. As readers we knew something big was going to happen because in the previous issue there was a major plot twist. This was the kind of thing Mr. Kirkman had used as the springboard to a different story place in the past. Except this time he decided that plot twist was the last one. The reason he gave in the column is he really had no place to go. He admitted he had ideas, but they all felt like filler. Another reason to go on selling comic books. A lesser person would have done that. Mr. Kirkman didn’t choose that path.

My next favorite part of this column was how he related he had been in a similar place a few years ago. A natural stopping place. He even described what was going to be the end of the series if it had ended there. It was bleak. I wouldn’t have been happy with it. The difference is he got there and realized he had story ideas that weren’t just filler. The issues between then and now vindicate that decision. Some of my favorite parts of the saga came after that earlier point. When Mr. Kirkman says he was done I believe him.

You could read the reluctance to do this between the lines. To his credit he knew it was the right decision and carried it out. I don’t know many with the integrity to do that. If you’ve never read a single issue of the comic I urge you to read this final column (link here). It is how every creative person should treat their audience and their series.