All forms of art live on imitation. When someone does something interesting others will take that technique and employ it. When it comes to episodic television the thing which has worn out its welcome with me is the cliffhanger ending.

The idea of watching television is to allow yourself to be manipulated by the actors and the continuing story they are telling. As of late the manipulation is happening with a capital M. The recent example which I think was the straw that broke this couch camel’s back was the season 7 premiere of The Walking Dead. At the end of season 6 almost all the major characters were seen kneeling in front of a villain who was going to kill one of them. The way the director shot the final scene was for us as audience to see the death blow from the perspective of the one receiving it. Leaving us a few months to speculate on who it would be. For a show about a zombie apocalypse The Walking Dead began to fall in love with the idea of cliffhangers throughout season 6. It became so common it reduced the stakes of the conflict because you wondered if they were just going to find a way to wriggle their way out of the dire situation. 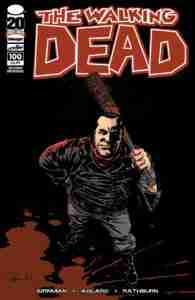 The interesting contrast is Robert Kirkman who is the writer and creator of the comic book by the same name as well as a writer on the TV show chose a different tack on the printed page. The same event shown in the show was the centerpiece of issue #100. Except on the final page of that comic we saw who was killed. We saw the consequence. I remember reading that issue and heading to the internet to commiserate and predict what that event would do to our other heroes. It was much more satisfying on the page than on the TV screen for me. It felt like the difference between being respected as a reader and made to feel a sucker as a viewer.

One of the things shows like The Sopranos, Breaking Bad and Game of Thrones get absolutely right is they ended their seasons showing the consequences of the characters’ actions. I spent countless months in between speculating on what those consequences would be. If you’re going to manipulate me then give me some release.

The other thing The Walking Dead got wrong with this cliffhanger is they diminished what Mr. Kirkman wrote in the comic book. By turning what is a harsh pivotal act in to some kind of macabre guessing game it lessened the impact of that selfsame death. After there was widespread discontent on social media with the cliffhanger ending the executive producer of The Walking Dead, Scott M. Gimple, he said he knew they had to “earn” the choice. That ability to make a bold choice like this means the resolution needs to be something unexpected. Unfortunately, it was one of the low points of the entire series. For the first time since I started watching I am skeptical of all that I see. The cast and crew of The Walking Dead has a lot of work left to do this season to “earn” my trust back. That’s a consequence of their overuse of cliffhangers.