I am about a month away from the final book in one of my favorite urban fantasy series being released. Author Kim Harrison’s version of a contemporary world where the supernatural is real and is out in the open is called The Hollows. 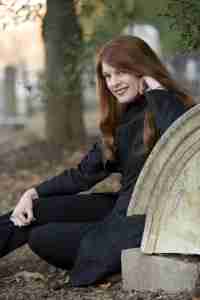 The tipping point for the supernatural races to reveal themselves is a virus spawned by genetic engineering of tomatoes. The virus destroys a quarter of humanity and at that point the combined supernatural community realize they are no longer outnumbered. Many of them help during the ensuing chaos and reveal that they were already embedded in powerful positions throughout society. This event is called The Turn and takes place in the 1960’s in the fictional timeline. 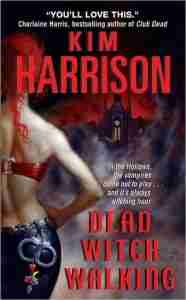 The first book “Dead Witch Walking” takes place forty years after The Turn as the existence of supernatural creatures has become commonplace but not necessarily accepted. The stories within The Hollows series are set in Cincinnati. The name for the series comes from the section of town where the supernatural folk called Inderlanders live. Law enforcement is also divided with each society having their own entity. In the beginning of the series we meet witch Rachel Morgan, who is the first person narrator of all the books, and her partner vampire Ivy Tamwood. The first book sets up their friendship and along with a pixy named Jenks create the three main characters the rest of the installments will focus on.

As is common in these urban fantasy series Rachel is a character who manages to straddle many of the supernatural races. Through the course of the twelve books she has profoundly affected the power structure within The Hollows and Cincinnati. What is great about the way Ms. Harrison plots these books is every decision Rachel has made has had consequences which have rippled through the following books. All too often in urban fantasy the protagonists do things which are forgotten by the next book. Ms. Harrison has loaded the proverbial one straw short of a camel’s burden on Rachel and unflinchingly shown her main character dealing with it.

There is also a very aromatic compnent to the series as places smell of burnt amber and certain races smell of sandalwood, cinnamon, or wine. I often recall the perfumes I like best when these passages are read in my mind.

For all of this the series is coming to an end with the publication of the thirteenth book “The Witch with No Name” right after Labor Day. As I look back over the previous twelve books it is interesting to notice when I think Ms. Harrison switched from writing episodes to actually plotting the path to a final ending. In my estimation it is book eight “Black Magic Sanction” where Rachel begins to bear the consequences of her actions and as she resolves the issues that are placed in front of her is, slowly but surely, creating a society of the outcasts and creating a family out of her friends. Ms. Harrison writes this with gusto and I race through each new entry.

Now I am down to one entry left and I am looking forward to seeing if Rachel lives happily ever after. I suspect she will but not without one more trial to overcome before getting her storybook ending. I can’t wait.