As of September 2015 the late-night television landscape has finished its generational face lift. In just 24 months almost all of the late night, and late late night, shows changed their hosts. Jimmy Kimmel on ABC was the only exception on the major broadcast networks. The last one to join is The Late Show with Stephen Colbert. 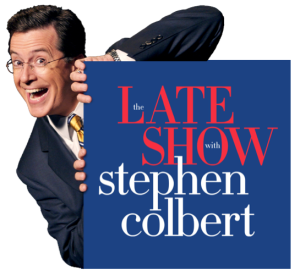 One of the things I have liked about all of the new faces in the late night hours has been the different ways the hosts, and their staffs, have re-examined the tried and true tropes of late night. Stephen Colbert had been the host of the very successful The Colbert Report on Comedy Central prior to taking over as the host of The Late Show after David Letterman’s retirement. Mr. Colbert has brought some of the structure of the previous show while leaving behind the character he played on that show. Although there are some nights I’m not sure the studio audience knows it is a different show. The same chanting happens as Mr. Colbert takes the stage as it did on The Colbert Report. 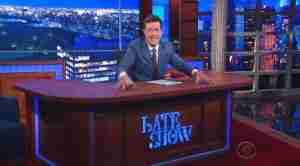 Mr. Colbert has made his monologue a cold open prior to the credits. I like this structure as it is usually a shorter much more highly focused suite of jokes. After the opening credits roll, from behind the desk, Mr. Colbert comments on the news and pop culture. This is the most obvious similarity to The Colbert Report. What is nice about this section is now that he is not playing a character we see the actual person doing commentary. I liked The Colbert Report but the character wore thin on me pretty quickly. I have to say that was my biggest fear about Mr. Colbert taking over The Late Show. It was unfounded as Mr. Colbert has turned out to be much more interesting to me as himself. He is the only one of the new breed of late night hosts not to have a sidekick to talk with. He dances a bit with his band leader Jon Batiste, who fronts the band Stay Human, but he hasn’t included him in bits or as a straight man. He has the faith to stand on the stage by himself.

He reminds me a lot of Dick Cavett who had a late night show on ABC from 1968-1974. Mr. Cavett frequently had newsier figures on his show. Mr. Colbert has done more of this than his competitors. It feels like he is staking out the territory of the “thinking person’s” choice to follow up their local news. He has had many of the 2016 Presidential candidates on. One of the great early moments for the show was when Republican Senator Ted Cruz was explaining his stance on same sex marriage and the audience began to boo. Mr. Colbert cut them off with, “However you feel, he’s my guest. Please don’t boo him.” It was an important early marker to lay down. His audience has been extremely respectful of all the guests since that moment. I think it is going to make The Late Show with Stephen Colbert a place where guests who cover the entire political spectrum will feel comfortable.

I believe this is the best lineup of shows in late night ever. Each host brings something different to the table which allows the viewer to gravitate to the one which does the best job at being the last thing they watch before sleeping. Mr. Colbert has become the final part of this Golden Age.