It is usually right about this time of year the first four months of new fragrances have left me losing my mojo. Thankfully it is also this time of year that the psychic jumper cables known as Sniffapalooza Spring Fling happens. After spending a weekend with my fellow fragrance fanatics I return tired, but refueled, to cover everything new I saw while in New York City for the weekend.

What has become a bit of a tradition for me is I arrive the afternoon before Sniffapalooza starts and visit my friends at Atelier Cologne. I was going to get the premiere of Blanche Immortelle the next morning but I also got the chance to sample the other new release Santal Carmin. The final part of our biannual ritual is for me to get a sneak peek at the next release. All I can say is it is one of my favorite notes in perfumery done Atelier Cologne style. 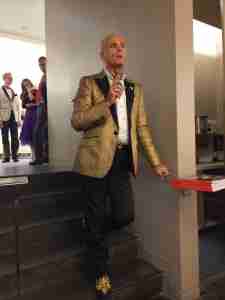 Saturday morning saw us all gather at Bergdorf Goodman for breakfast and the presentation of new releases. The highlights were a new Bottega Veneta Essence Aromatique meant to be a cooling splash for the summer. Two new Tom Ford Private Blends which will be released early in June as part of a collection extrapolating off the vibe of Neroli Portofino. I got a preview of both and one of them is going right to the top of my summer wearing list. As mentioned above Atelier Cologne premiered Blanche Immortelle and for those who find immortelle a bit tough to approach Atelier Cologne has once again transformed the way you look at a difficult note by making it a part of a cologne architecture. The breakfast finale was the irrepressible Roja Dove who spoke about many within his Roja Parfums line but the newest release is Lily Extrait. As with all of the soliflores in Mr. Dove’s collection it continually makes you ask “Is it real or is it Roja?”

From Bergdorf Goodman we headed to lunch at Brasserie 8 ½ and while we rested and recharged we were treated to the fragrances that were created by a chef and an interior designer. The chef is Roble Ali and his fragrance is called Clique by Roble and Chef Ali wanted to present a three course meal of the olfactory.  It is a finely tuned gourmand that does indeed feed the senses. The interior designer is Tobi Tobin and she presented the four fragrances which accompanied the debut fragrance Crow. Ms. Tobin translates her chic style of interior design deftly into a collection of fragrances which exemplify her aesthetic. 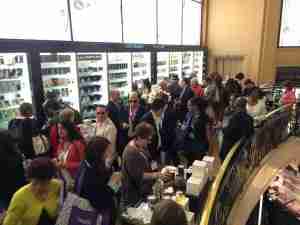 The next stop was a little sad as we bid a Sniffapalooza adieu to the fragrance collection at Henri Bendel. By the time Fall Ball arrives in October Henri Bendel will only be carrying their own private label fragrance. It was a little melancholy standing shoulder to shoulder on the mezzanine where I’ve discovered so many new things and realized that this was very likely my last visit to it. From there it was back to my hotel to rest up for Sunday.

We gave Soho a Sniffapalooza wake-up call as we convened bright and early on Sunday at Osswald. Awaiting us was the entire Stephane Humbert Lucas 777 line in its US debut. I had a lot of fun introducing people to the line especially the fabulous Kohl de Bahrain. The fragrant caravan then traveled to the Fragrance Republ!c to be introduced the latest release 01/07. This was followed by a visit to the Scentsorium which is Sue Philips’ home to her very successful custom perfume business which previously was a traveling show. With the Scentsorium her unique custom perfume experience is open for business in a space which surrounds one with creativity. 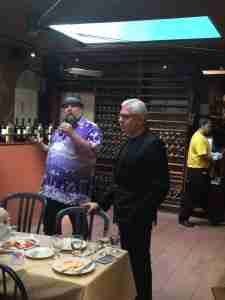 We all needed a break and lunch had arrived in the nick of time. It was my turn to entertain the group as I emceed the Eau de Sniffapalooza lunch where I had the great pleasure to introduce the perfumers behind the brands Code Deco, Jazmin Serai, Suleko, Phoenecia Perfumes, Nomad Two Worlds, Arts & Scents, and Neelu Kumar. It was also my great pleasure to introduce Michael Edwards as special surprise guest to wrap everything up as he spoke about the excitement and passion the independent perfume movement brings to the world of fragrance.

My final stop was at MiN New York where I got acquainted with the new Perris Monte Carlo line; but the most interesting thing was a door. I asked about this fabulous looking door that looks like it leads into a wizard’s keep or medieval castle. The cryptic smile and the “we will be letting everyone know what is behind the door in a couple of weeks” has me as curious as the proverbial feline.

It was time to get in my last hugs and head for my train back home. Once again the event was a smashing success due to the hard work of Team Karen and everyone who joined in this celebration of all things fragrant. I am now back to 100% charged until I get my next boost at Fall Ball in October.

One of the things about writing about the world of fragrance is my calendar tends to have some important events that mark each season. None of these events is more enjoyable to me than the twice-yearly event known as Sniffapalooza. Sniffapalooaza was created, and continues to be run, by Karen Adams and Karen Dubin. They are affectionately referred to as The Karens within the industry and among perfume aficionados. The Karens began as one of the latter but over the years the impact of Sniffapalooza has made them part of the overall industry. That being said they have never lost the enthusiasm for perfume that led them to create this event, and it shows. 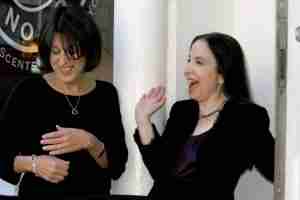 Sniffapalooza Spring Fling 2014 will take place on Saturday and Sunday May 3 & 4, 2014 in New York City. It begins with breakfast at Bergdorf-Goodman where we are greeted every year by the fabulous Tom Crutchfield of Roja Perfumes who ushers us through the empty store down to the café. This is the beginning of the scenes which get repeated at every Sniffapalooza as perfumed friends re-connect and those who we might have only known through Facebook or a perfume forum is standing there in real life. The morning is jam-packed as every line in Bergdorf Goodman presents their latest and greatest. Once we are done we spend time on the beauty floor getting better acquainted with our favorites. 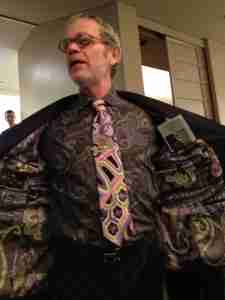 Lunch is an opportunity for presentations from a varied roster representing almost every corner of the fragrance world. I will have the great opportunity to introduce Colognoisseur to this audience. After lunch we visit Henri Bendel and Krigler Perfumery at The Plaza, and finish day one at Molton Brown.

After a night of sleep we gather for more sniffing downtown at Osswald. This is followed by visits to two new fragrance initiatives that are very exciting to me. The Fragrance Republ!c is a subscription service and community which produces a new perfume every month for their subscribers. The Scentsorium is the brick and mortar home to Sue Phillips who has spent years teaching classes to enthusiasts on how to make their own bespoke perfume. Now there is a place where this can happen any day. Then my favorite part of Sniffapalooza comes next the lunch called Emerging Artists Uncorked where new indie perfumers present their creations. I was so enthusiastic about this The Karens have allowed me to be the keynote speaker and MC of the lunch. I love the opportunity to share the best new indie fragrance with this group.

The final part is free form wandering in The Fragrance District downtown as we visit MiN New York, Diptyque, Le Labo, and Atelier Cologne. Over the rest of the afternoon we share our last moments together and the best smelling group of people board various modes of transportation back home. I will be covering everything from this year’s Spring Fling right here on Colognoisseur. Viva La Sniffa, Baby!