There are many success stories where people talk about how they went to Plan B after Plan A had not worked out. There is a different version of this story currently happening within popular music. Australian-born singer Sia Furler now known only by her first name, Sia, had modest success as a singer as Plan A. Eventually she would transition to Plan B as a songwriter for others. Only to have one of those others show how dynamic her voice is and she has now come back to Plan A while continuing Plan B.

Sia was born in Adelaide and for many years was in a band called Crisp. When the band fell apart she began to record solo albums. She also moved to London at the same time. From 2000-2010 she released four albums. The track “Breathe Me” off of her album “Colour the Small One” was the song used over the series finale montage of the HBO series “Six Feet Under”. That was what sent me to the internet to find out what that song was and who did it. I discovered a singer who was largely unknown but sang these engaging lyrics seemingly influenced by multiple musical genres. I expected her star was going to rise. Except it never really did, which was when Plan B arrived. 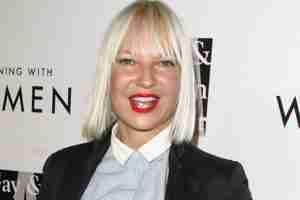 While working on her fifth album “We Are Born” in 2009 she was approached by Christina Aguilera to write some ballads for her. Three of those songs would make it on to Ms. Aguilera’s album “Bionic”. Even though Sia was still working on Plan A she probably didn’t realize Plan B had arrived. “We Are Born” was again moderately successful but it would lead to Sia to retire from the studio as a singer and to fully embrace being a songwriter for others.

She would become one of the most sought after songwriters out there. It would reach its peak with her providing the song “Diamonds” for singer Rhianna to record. One of the way songwriters like Sia work is they will record a stripped down version of the song to give to whomever they are providing the song for. In 2011 she wrote a song for Katy Perry named “Titanium” which was supposed to be produced by David Guetta. She supplied a demo track of the vocals and was likely off to write another song. As Mr. Guetta worked on the song with Ms. Perry she decided it sounded too much like her previous songs and decided against doing it. Mr. Guetta still believed in the song and looked for a different vocalist to take the lead. Until he realized that demo track by Sia was the lead he was looking for. He would release “Titanium” with Sia’s demo vocal included. It became a giant hit. It also propelled Sia back into Plan A.

She un-retired and returned to the studio to release 2014’s “1000 Forms of Fear”. If “Titanium” was giant, the first single “Chandelier” was even bigger. It is one of those rare pop songs which was everywhere while also being respected for the artistry. It was a top 25 mainstay on many year-end lists of the best songs of 2014. Now the singer was equivalent with the songwriter in levels of success. Plan A and Plan B had come together as one.

Sia has continued to flourish in both parts of her career. She released a follow-up album to “1000 Forms of Fear” in 2015, “This is Acting” which was equally well received. Concurrently she wrote hits for Beyonce, Katy Perry, and Celine Dion among others.

It is a rare story to be sure but one to watch move forward with appreciation for the person behind it all.