In science we talk of “family trees” where the professor who you studied under is the figurative “mother/father” and the person they studied under the “grandparent” and so on. Perfume doesn’t seem to be as collaborative. I have noticed a recent trend, though, of identifying new perfumers based on who they studied under. Because of my scientific background I like this and am hoping there is more of it. Most of the ones I am thinking of are the bigger name perfumers. There are fewer examples within independent perfumery but there are some. One of those has just resulted in the first release by the student; Sammarco Yael.

I first heard about Yael when it was premiered at Pitti Fragranze but I thought I was getting mistaken information. I was being told that brand owner/perfumer Giovanni Sammarco did not make Yael. It was a graduate student designing a perfume for her thesis; Beatrice Baccon. An interview by both Sig. Sammarco and Mme Baccon given to Fragrantica writer Sergey Borisov filled in many of the blanks. Mme Baccon created a perfume as part of her Master’s Degree studies. In the interview, her thesis was not only creating the perfume but also understanding the regulatory landscape affecting how to produce it. Throughout Sig. Sammarco was by her side to teach and guide her. The result is a perfume which feels part of the Sammarco collection but perhaps the introduction to a new one, too. 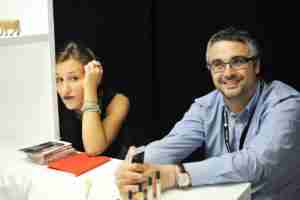 Yael is inspired by all the types of kisses we receive; mother’s, lover’s and friends’. That is how Mme Baccon constructed Yael, with an accord representing each one of those kisses.

The friends’ kiss is meant to be that of young people looking forward to an evening out. Mme Baccon uses ginger for its energetic effect. The zippy ginger is modulated by a bit of pink pepper providing herbal spiciness as complement. The lover’s kiss is represented by that classic flower of romance, rose. A deep spicy rose connects back to the top accord. If there is a bit of a young perfumer’s stumble it comes in the use of raspberry which takes over at the expense of everything else for some time. I would have liked it better if the rose was given the predominant position over the fruit. Once the berry begins to recede the best part of the perfume is revealed; the mother’s kiss. Mme Baccon uses a comforting mixture of sandalwood and orris. It forms a smooth slightly powdery hug to which a few musks are swirled in, providing that human connection. The orris is a bit of a lipstick style iris, the sandalwood is like warm cookies in the oven. The musks are intelligently used to keep it comforting without becoming confrontational.

Other than the moment in the middle where the raspberry is overwhelming Yael shows a perfume student listening to her teacher and finding her own way. Time will tell if this is the beginning of the Baccon branch from the Sammarco family tree. I hope it is.