Right now, there are heritage brands springing up seemingly every month. I don’t know if Robert Piguet was the beginning of this trend because it never went entirely away. Something somewhat worse happened. The massive tuberose fragrance Fracas created in 1948 by Germaine Cellier would be re-formulated, as ingredients became prohibited, died a slow death. Then in 2006 perfumer Aurelien Guichard became the caretaker of Fracas and the brand overall. He brought back one of the greatest perfumes ever made to something that lives up to that description. Over the next few years M. Guichard would go the same for some of the earlier Robert Piguet compositions with the same care. Plus, the brand would also begin making new fragrances also under M. Guichard’s talented nose. For this edition of Perfume 101 I want to point out five other Robert Piguet perfumes you should try besides Fracas. Because everyone who loves perfume should try Fracas.

After taking care of Fracas M. Guichard spent the next five years doing the same kind of restoration to six other Robert Piguet originals. Three of them show what a creative brand this had been.

Bandit was the earliest perfume created by Mme Cellier for Robert Piguet. It foreshadows some of what will show up again in Fracas but for Bandit she constructs a white flower accord but she tempers it with a rich leather accord. The leather picks up on the indoles beautifully. It subsides onto a patchouli, vetiver, and oakmoss base. The current formulation is wonderfully faithful to the original.

Visa is the under the radar fragrance of the early Robert Piguet catalog. As M. Guichard presented the reformulation to me it was a radiant proto-gourmand. From a fresh peach and pear opening into an immortelle dominated heart down to an Oriental base of sandalwood, leather, and patchouli flavored with healthy amounts of vanilla. That picks up the maple syrup sweetness of the immortelle forming a gourmand accord. 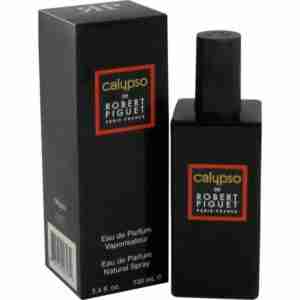 Calypso is like the lost original Robert Piguet. It was one of a handful of perfumes released after Robert Piguet’s death in 1953. Perfumer Francis Fabron would compose the original formulation which M. Guichard modernized. This is the anti- white flower Robert Piguet what it retains of the past is the green vein of stemminess which is attached from galbanum through to the leather in the base. What comes between is a powdery orris, and rose heart. If the perfumes have sounded too much, so far, Calypso is much lighter in style.

In 2011 Robert Piguet would start releasing new fragrances. These would be designed with a less overtly floral nature to appeal to perfume lovers who wanted something more mannered.

Bois Bleu is a citrusy mix which segues into a fabulous violet heart which is paired with nutmeg. Clary sage and lavender provide underpinning but this is one of the best violet hearts of any violet perfume I own. A very straightforward woody base of cedar and sandalwood finishes things.

I had admired everything M. Guichard had accomplished but when I tried Knightsbridge at Esxence in 2013 I knew this was the modern masterpiece that was worthy of bookending Fracas. It was based on the simplest of briefs; “Imagine what Harrod’s smells like at 2AM.” M. Guichard’s interpretation are three phases of fabulously realized duets. Starting with rose and nutmeg to orris and sandalwood, ending on leather and tonka. Each harmonizes in distinctly engaging ways. One of my favorite perfumes of the last five years.

If all you knew of Robert Piguet was Fracas take another look at these five; there is much more to see here.