If you want to know what video reviews looked like prior to YouTube you need to go back to 1977. That year a show on PBS called “Sneak Previews” featured two movie critics from rival Chicago newspapers debating a new movie and giving their opinion. What made it work was the difference in perspective about movies. Each of them had preferences they were happy to share even if the other disagreed. It is one of my favorite forms of criticism. Two opinions from different positions found in one place. That dynamic has continued into the world of video reviews on the internet. 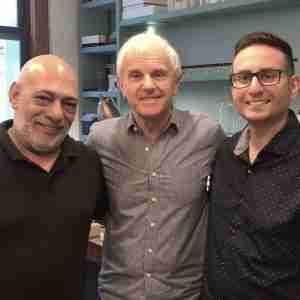 One of the fragrance equivalents were the shared reviews of YouTubers Redolessence and Brooklyn Fragrance Lover, Steven Gavrielatos and Carlos J Powell respectively. They would travel back and forth to each other’s home studio and would provide reviews together. These are some of my favorite perfume video reviews because they both had different tastes which they would use to form their opinions. They also clearly enjoyed their partnership. There was a warmth which came through the screen when they were together. It is not surprising that they decided to extend their collaboration into creatively directing a perfume. To achieve this they worked with The Society of Scent and perfumer Jean-Claude Delville. Together they would distil the give-and-take of their perfume tastes into a satisfying fragrance called Redbrook Parfums Underground.

The name of the brand is a portmanteau of their YouTube channels. Underground represents the amount of train time spent traveling between their homes to achieve their vision. One of the videos about the creative process shows both Mr. Gavrielatos and Mr. Powell in the courtyard at The Society of Scent with lots of strips to smell. You can see a vigorous conversation happening between the two creative directors and the perfumer. I smiled at that thinking the creative tension would produce something memorable.

It begins with a fresh top accord of citrus and ginger. Ginger has become the contemporary way to add fresh. The equally modern choice for herbal effect is baie rose which is also present in the opening of Underground. This is the appetizer of what is to come. Underground travels down parallel tracks for a bit as patchouli and vetiver runs next to a rich gourmand vanilla and chocolate. They come together through that overlap of the chocolate in patchouli. Together they sped on an express track right to its destination.

As many may know Mr. Powell would pass away just as Underground was on the verge of being released. I know what a personal dream it was for him to have this opportunity. To share it with his best friend added more to it. What remains is a fitting perfume which represents the joy of partnership between the two men and the perfumer who helped it happen.

Disclosure: This review is based on a bottle provided by Redbrook Parfums.