As I have related in many versions of this column I am fond of the late-night talk show. I have also stated previously that I believe we are in a Golden Age of these shows. There is one for everyone which should provide you a smile to take with you to bed. There is one host who I think does not get enough credit for the longevity of his late-night career, Bill Maher.

I remember discovering this weird show on Comedy Central back in 1993 called Politically Incorrect. The host was a comedic actor who I’d seen in a few movies and TV shows but nothing that memorable; that was Mr. Maher. The concept of the show was simple Mr. Maher would spend his time discussing the topics of the day with a diverse panel of four guests. From the very early days he would have experts from all over the political spectrum into which he would add celebrities. One of the more famous pairings on the show was that of Florence Henderson and Marilyn Manson. What took place was a substantial discussion beyond their surface images. It is something the show excelled at. In 1997 it would move to ABC where it would run until 2002. ABC would cancel it because of remarks by Mr. Maher about 9/11 which were judged insensitive. 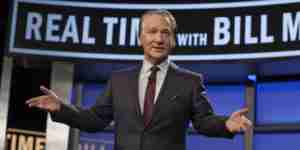 One year later HBO gave him one hour per week to do Real Time with Bill Maher and he has been there ever since. In many ways the freer atmosphere HBO offers for the kind of discussion Mr. Maher encourages on the show has been freeing. Plus, nobody has to be concerned about language on HBO. To be informed you need to hear both sides talk about their ideas. Real Time is one of the few places where this interaction takes place. Mr. Maher has gotten very good at guiding the action over the 20-plus years of doing this. The panels are the centerpiece of each episode of Real Time but it is not my favorite part.

That comes at the very end when Mr. Maher does “New Rules”. In this segment he starts off with a series of topical jokes which lead up to a longer commentary on the final “New Rule”. It is in that longer soliloquy that I find Mr. Maher challenges my notion of the way I think. It provokes me to consider his perspective see if there is something there I want to take in more seriously.

I think Mr. Maher is underrated considering he was one of the earliest practitioners of this “news as comedy” format. There have been many great examples since Politically Incorrect but Real Time with Bill Maher reminds me that one of the originals is still going as strong as ever.