I think there are times that a perfume so perfectly characterizes its time that when things move on that fragrance ends up in the Dead Letter Office. One of those examples is La Nuit de Paco Rabanne.

La Nuit was the fourth perfume released by Paco Rabanne in 1985. In 1985 we were at the height of the nighttime television soap operas of Dallas and Dynasty. In America it was a race to see how much one could acquire. That attitude would peak in 1987 with Michael Douglas as Gordon Gekko in the movie “Wall Street” where he would proclaim “greed is good”. It also was a time when fragrance for the final time in the 20th century would also go for it with its own “greed is good” mentality. La Nuit is one of the best examples of this time period. 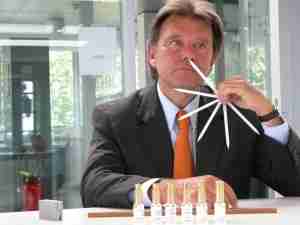 Paco Rabanne Fragrance was still looking for successors to the very popular Calandre and Paco Rabanne pour Homme. They had tried in 1979 with Metal to create a straightforward pretty floral. My impression was it was meant to be a softer version of Calandre. It was so similar to my nose that I think that caused its eventual demise. You just didn’t need to own both. By the time the creative team was ready for the fourth release they decided to go entirely in the other direction. They sat in the middle of the 1980’s which lead them to believe a full throated leather chypre would be the right choice. They enlisted perfumer Jean Guichard to come up with this.

Whenever I wear La Nuit I feel like I am putting on a pair of perfumed shoulder pads because this is a perfume which definitely wants to have it all. M. Guichard stuffs it with spice, florals and a tiny bit of fruit before one of the more strident leather chypre accords I know of kicks in. I often comment that there are perfumes that wear me instead of the other way around. La Nuit is one which epitomizes that kind of thinking.

La Nuit opens confidently with a bit of citrus flash before myrtle, artemisia, pepper, and cardamom really pick up the pace. This rolls, with a soft peach note providing the connection, into a heart of jasmine and rose. Now we have a full strut happening. The rose and jasmine carry a presence but the real power is on its way. At first cedar, oakmoss, and patchouli form the skeleton of the chypre. Then M. Guichard drops in a hugely powerful leather accord which makes that chypre become underpinning to it. As the base evolves it gets more and more animalic until at the end you are left with a pacing untamed beast stalking the scene; in shoulder pads.

La Nuit has 18-24 hour longevity and above average sillage.

La Nuit started out with strong sales for the first three or four years before seemingly going out of style along with those shoulder pads. About the time that fashion was seen as an example of deplorable excess La Nuit was also victim of an era which had passed it by.

La Nuit is a perfume which I seem to want to wear when there is a significant drop in the temperature. I think the grandiosity of it allows me to put on some perfumed shoulder pads underneath my sweater against the chill.