This column is often dictated by my digging through the discount bins while Mrs. C is shopping elsewhere. While digging a few weeks a go I ran across some gold bars in the bin. Those bottles meant to look like gold ingots is Paco Rabanne 1 Million. Especially for this time of year it is a real Discount Diamond.

Paco Rabanne has been making perfume since 1969. Prior to the 2000’s those early perfumes were some of the best of their kind. After we entered the new century Paco Rabanne became a more aggressive mass-market fragrance producer. A pillar perfume followed by multiple flankers. While most of the flankers are easy to dismiss the pedigree of the brand shows up in the pillars. In 2008, 1 Million was the new pillar which illustrates the point. 1 Million was the fall release for the year. A team of three perfumers, Michel Gerard, Olivier Pescheux and Christophe Raynaud would combine for a rich Oriental style. 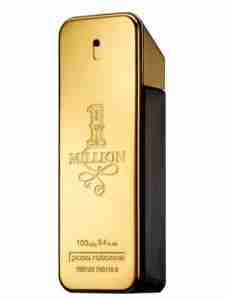 1 Million opens with a chilled citrus accord composed of mandarin and spearmint. The mint is where the frost comes from. It is given a blast of spicy heat as cinnamon removes that icy coating. The cinnamon citrus accord is deep and satisfying. The perfumers then add in rose and leather. The leather is a soft driving glove type. It creates a trapezoid of animalic floral spicy citrus. This is where 1 Million smells as good as the name promises. It fades to a typical vanilla sweetened amber base accord.

1 Million is the kind of fragrance that shines in the colder weather. It is versatile while adding a classic Oriental aesthetic to any dresser. If you come across a bottle in your local discount bin it is worth its weight in….well you know.