I have jokingly referred to perfumer Bertrand Duchaufour as the “High Priest of Resins” for the number of amazing perfumes he has made with that as the keynote. It coincided with my initial deep dive into niche perfumes as it seemed like he was producing one new riff on incense-based perfumes after the other. That I have an entire shelf of these perfumes plus that they are some of my all-time favorites is indicative of the quality. M. Duchaufour has proven to be much more than a one-trick perfumer with another shelf containing his non-resinous perfumes which also contain many I adore. It still doesn’t mean I don’t want him to don his robes and take up his censer to create something new. Olfactive Studio Woody Mood heralds that return. 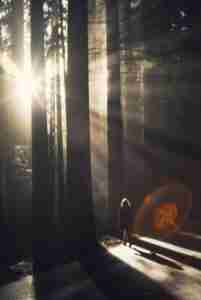 Olfactive Studio is the brand owned and creatively directed by Celine Verleure. The creative process is triggered from a photograph as opposed to something written. It has been one of the most successful at marrying the visual with the olfactory. For Woody Mood the brief comes from photographer Roger Steffens 1973 composition called “Redwood Alien”. It is a striking picture of refracted light through the redwood trees. Before I knew the title, it felt like an outdoors version of the poster for “Close Encounters of the Third Kind”. The creative team would use this visual as the starting point for creating a soaring perfume in a cathedral of sequoias.

The top accord is a lovely introduction of clary sage, ginger, and saffron. Taken together the saffron smooths out some of the spikier aspects of either herb. This is a highly refined opening from ingredients used in less refined ways more typically. The sequoia wood then rises upward. Instead of just allowing the wood to be the only thing M. Duchaufour makes two quirky choices. First a precise amount of spikenard adds a veil of smoke. This is exactly the right amount not obtrusive but in the distance. In the same vein black tea and styrax form a rubber accord. It is again off in the distance but as a way of keeping the middle part of the development from being all about the wood I found both to be charming in their oddity. The censer begins to swing as the incense rises in resinous waves. M. Duchaufour brings out a refined leather accord as underpinning. All of this comes together over a base of earthy patchouli.

If you are a longtime fan of M. Duchaufour’s resinous creations Woody Mood is a must try. I think it finds its own space on his prodigious incense spectrum all its own. If you wonder about my “High Priest of Resins” sobriquet try Woody Mood. If you like it there is a whole world of discovery ahead. I know there will be another bottle on my shelf dedicated to M. Duchaufour’s resinous perfumes.

Disclosure: This review is based on a press sample provided by Olfactive Studio.