Stranger Things is an eight-episode series by The Duffer Brothers. It takes place over the first week of November 1983 in the small town of Hawkins, Indiana. The story is propelled by the simultaneous disappearance of one child, Will Byers; and the appearance of another, the enigmatic Eleven. The search for Will consumes his three friends who find Eleven who they call “El”. The four kids work together while at the same time the town sheriff Hopper investigates in more traditional ways. Over the course of the series Will’s mother, Joyce, played by Winona Ryder finds out there is more going on than meets the eye. This all comes together in a mix of horror and comedy that works for the most part. 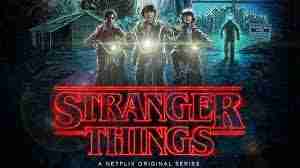 While I was watching it I kept coming back to the question when is imitation not inspiration. The Duffer Brothers use so many things from 1980’s movies nearly verbatim there are times it felt like a manic fan video pulling scenes from E.T., The Goonies, Heathers, Stand By Me, Aliens, Flatliners, Explorers, etc. There was an overall feel that The Duffer Brothers wrote Stranger Things while tripping one Saturday night reminiscing about their favorite movies and pulling their favorite characters and scenes together. Which is to say I found almost nothing unique about anything I saw. Which doesn’t mean I wasn’t entertained because The Duffer Brothers did choose some of the best stuff from their inspirations.

The other issue I had was eight hours was too long for this. It would have been much better at half the length. There’s an awful lot of overheated adolescent angst and frantic adults in the first few hours which could have been shortened considerably.

I think the success of Stranger Things is down to it is a near-perfect video time capsule of the 1980’s. If you lived through the times you will laugh when you see one of the characters in a perfect Farrah Fawcett hairdo. There are movie posters and comic books to delight the geeks sprinkled throughout. Corded telephones, television with rabbit ears, and Ford Pintos all present.

It is a fun way to spend a weekend plowing through the series. Unlike most, even though there are a couple of unanswered questions, I don’t care if there is a second season. One weekend lost in the 1980’s is probably enough for me.