There were two sports that I learned at my father’s side. One was horse racing. The other was boxing. He loved both sports and equally enjoyed having a son to pass his knowledge on to. I was never going to be a jockey. My short-lived boxing foray showed me I didn’t have any aptitude at that either. Like my father I was going to be an armchair aficionado. Because of his love for the sweet science we would go down to the 5th Street Gym in Miami Beach to watch the fighters train. On one of our earliest visits Muhammad Ali was training. 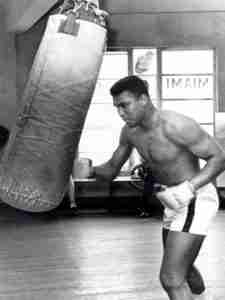 I think it was 1965 and he was training for his rematch with Sonny Liston whom he had won the Heavyweight Title from two years previously. Every time we visited 5th Street I would marvel at the hand speed as I watched the boxers train. Even at six years old I could tell Ali was a different kind of fighter. He intently listened to his trainers but he also had this incredible spirit as he went about his training routine. Focused when he needed to be; smiling and talking when he wanted to. The athleticism was one thing but there was also something else a six-year-old was able to learn too.

At that age I spent as much time watching the adults around me as I did anything. I was looking for what the proper cues were. What was it I could act like to be considered a “big boy” which was the goal of any six-year-old boy. The people in the gym watching were probably three to one white to black. The black people clearly adored Ali. He stood for many things. After beating Liston in 1963 he would convert to Islam soon after changing his name from Cassius Clay to Muhammad Ali. Many black men were adopting Islam and changing their names but Ali was one of the most prominent to do it. He stood as a representative to his beliefs.

There were also some of those black patrons at the gym that just liked seeing a man of their skin color being as admired as Ali was. He stood for a race without backing down. His fast talking rhyming style made him the street rapper of his day. His people loved that he was bringing that out of the shadows of the urbanized areas of the country.

What I found most interesting was the two reactions I noticed on the white men. On many there was an open disgust. I know if I could read their mind they were hoping Liston would knock him out and a colored man who knew his place would be on top again. That was most of them.

There was also a smaller group who realized we were in the middle of a generational change in America of which Ali was part of. On them I noticed that slight smile as they watched. These were the men who weren’t going to resist the changes coming they were going to figure out how to adapt to them. I am happy to say my father was one of this group.

From that point on I was a Muhammad Ali fan. When he declined to be drafted to fight in Vietnam I didn’t care. My father explained it to me as best that he could. I understood he was standing up for his beliefs and I think that was what my father wanted me to learn from what was happening. 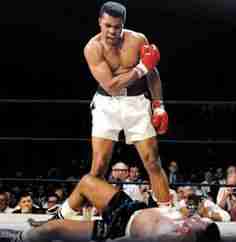 As I got older Ali was an enduring star. Throughout the 1970’s as he had his most famous series of fights with Joe Frazier and George Foreman he would shine his brightest. Like too many boxers he went on too long and Father Time finally KO’d him when he retired for good in 1981.

The final phase of Ali’s life was that of ambassador and sportsman for boxing and Parkinson’s Disease which struck him beginning in 1984.He would light the Olympic flame in 1996 in Atlanta. Throughout the next twenty years he stayed as active as his condition allowed.

As I reflect on the man who passed away yesterday I kept thinking about that day in the 5th Street Gym when he taught me about boxing and human nature all by being himself.