A few years ago, when attending a Sniffapalooza one of the stops was the Molton Brown store in Soho. I have been a longtime fan of the bath products but the fragrances had been underwhelming. On that day, they presented a collection based on different countries. I was surprised at how much I liked them despite being examples of most of the prevailing perfume trends. Since that day I have continued to carry that same thought as I have tried their new releases looking for one which would offer a something a little bit different. The latest release Coastal Cypress & Sea Fennel doesn’t create a new direction in aquatic fragrances but it does have a couple nice wrinkles to it.

Over the past few years the Molton Brown fragrances have followed the lead of the bath products by naming themselves after the main ingredients. If you like the fragrance all the ancillary products are available and if the bath product appeals the converse is true. Perfumer Carla Chabert succeeds by tracking closely with the refreshing nature of the bath gel. She focused on a composing a perfume which was akin to a cool shower after a day at the shore. The wrinkle I wrote about is the use of cardamom and jasmine in significant quantities enough so that their names could have been added to the name, too. 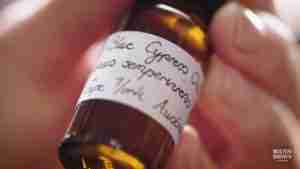 Coastal Cypress & Sea Fennel opens with a very typical marine accord. The first few moments almost have a by-the-book aquatic accord. Mme Chabert works to change the mundane with a healthy dose of cardamom. The cardamom has that lemon-tinged character that provides a bit of muted luminosity while also adding some weight grounding the more expansive aspects of the marine accord. Fig leaf and violet leaf provide the sea fennel effect as it comes off as a soft green. Mme Chabert then uses one of the synthetic non-indolic jasmines to provide significant expansiveness before the cypress shows up. It is listed as “salted cypress” in the note list but I don’t get that as much as weathered cypress. This is like driftwood, sun bleached and transparent, which fits in with the jasmine. Later on, cedar and some laundry musks tie Coastal Cypress & Sea Fennel off.

There is a nice fragrance collection quietly growing at Molton Brown. Coastal Cypress & Sea Fennel even portends something greater for the future.

Disclosure: This review is based on samples provided by Molton Brown.