As anyone who reads this column knows we have now entered my favorite time of the year. Starting on Thanksgiving and lasting until the New Year everything about these next few weeks are what makes me happiest.
As I have mentioned in the past beginning from from the day after Thanksgiving I wear a Santa hat and a different Holiday themed earring until January 2nd. Dressed up like that I receive many smiles followed by “Merry Christmas!” Because anyone wearing that hat and that earring “Merry Christmas!” is the thing to say. It has also been a great way to start conversation while waiting in lines or attending tree lighting ceremonies or The Nutcracker. When I say this time of the year makes me happiest it is because it is when I feel like we are more connected to each other. Which is why the few who insist on policing the way we greet each other during this joyous time put some frost in this jolly old gentleman’s beard.

Last year I saw more than I ever have of people correcting others when they wished some one a “Merry Christmas!”. “I’m not a Christian.” “We’re Jewish!” We don’t celebrate that!” were among the answers I heard. I was wondering why there was a need to correct someone who was clearly wishing you the Joy of the Season. Which then got me to thinking about Star Trek. 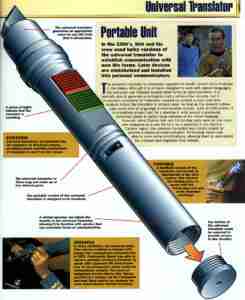 One of the great things about Star Trek from the very beginning was creator Gene Roddenberry realized if different races and species couldn’t communicate living peacefully would be nearly impossible. The whole concept of trying to communicate with another intelligent life form and the difficulties inherent in it were displayed beautifully in last year’s movie “Arrival”. So, Mr. Roddenberry’s version of the future included a device known as a “Universal Translator”. This allowed any race to speak to any other race in their own language translating to the listener’s language simultaneously. Throughout the series in all its incarnations the ability to speak to someone else in their own frame of reference while using your own words is what leads to a wide universe where words can rule over phasers. Which brings me back to Holiday greetings.

I am hoping that more people will employ their own Universal Translator when people wish them a happy greeting. When I say, “Merry Christmas!” Please translate that to Happy Hanukkah, Happy Kwanzaa, Season’s Greetings, Happy Holidays, Happy Festivus or what ever you celebrate over the next month or so; because that’s what I mean.